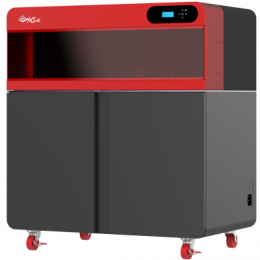 SAN DIEGO — May 18, 2016 – Memjet has announced that XYZprinting, a global market leader in 3D printing, will use Memjet’s patented printhead technology to increase the speed and affordability of its 3D printing platform. This is the first time Memjet’s printheads have been used for 3D printing. XYZprinting will use Memjet’s patented technology to create fast, price-competitive solutions capable of expanding 3D printing opportunities into new markets. The solutions are expected to be available in early 2017 in the Asia-Pacific region. Previews of XYZprinting’s Memjet-based 3D printing platform can be seen at the Memjet stand (Hall 5, stand C24) at drupa 2016 in Düsseldorf, Germany.

The 3D Opportunity
CONTEXT, a global IT research firm, recently published a report that indicates strong growth in the market for 3D printers. In its report, "3D Printing Market Trends Q4 2015 and Full Year," the firm notes that worldwide shipments for 3D printers rose 19% in the fourth quarter of 2015 and 30% throughout the full calendar year.

The industry’s progress is reflected in XYZprinting’s expanded product line. Simon Shen, CEO of XYZprinting and its parent company, New Kinpo Group, says, “The past year has been a time of growth both for 3D printing and for XYZprinting. We introduced several 3D printer models at the CES 2016 show, and will launch the new da Vinci Mini Series 3D printer and 3D pen this summer. Our partnership with Memjet enables us to build on this success, giving us the technology we need to dramatically enhance the speed and economy of our business-class solutions.”

See the Opportunity at drupa
Len Lauer, chairman and CEO of Memjet, notes, “XYZprinting has a strong reputation for delivering 3D products that are accessible, high quality, and easy-to-use. Memjet shares a similar reputation for the way our printheads have transformed traditional printing processes. Bringing the power of the XYZprinting organization together with Memjet technology creates a disruptive new solution that enables a whole new group of businesses to benefit from the potential of 3D printing. We are looking forward to presenting this exciting new development at drupa 2016.”

If you are interested in meeting with Memjet at drupa, visit rockyourprint.com for more information.

About Memjet
Memjet created a whole new category of inkjet printing when it introduced its revolutionary printhead technology. These color printheads use Memjet’s unique Waterfall Printhead Technology that fires millions of ink drops per second. The waterfall technology and related components hold approximately 3,500 global patents, demonstrating both the innovation and the value of this solution.

Memjet has since grown to become a global leader, offering page wide, color printing technologies that provide remarkable speeds and affordability to a growing number of customers and markets, with a focus on desktop, wide format, and production applications.

Memjet maintains its corporate office in San Diego, and has offices in Dublin, Sydney, Taipei, Singapore and Boise, Idaho. The company is privately held.

About XYZprinting
XYZprinting, a New Kinpo Group company, is the world's leading 3D printing manufacturer. Dedicated to bringing cost-effective 3D printing to educators and classrooms, consumers and artists, small-to-midsized businesses, and households around the world, XYZprinting has broken down the barriers of 3D printer ownership by providing an easy-to-use device that delivers an outstanding user experience, whether connected to a computer or via mobile. Its printers have won several accolades within the 3D printing industry at major technology industry events and by top publications. XYZprinting currently has offices in China, Japan, Korea, Thailand, the United States and Europe.