The battle between the major digital production printing press manufacturers is like a game of one-upmanship, with each trying to leapfrog over each other from a technology and product development standpoint. Xerox hosted a "Color Reignited" event for nearly 120 customers at its Gil Hatch Center in Webster, N.Y., May 8-9 to launch a new press that it considers to be an industry game-changer. Called a world first, the new high-speed, six-station Iridesse color press enables four-color CMYK printing with up to two specialty metallic dry inks - all in one pass.

The Xerox Iridesse Production Press is the only digital press that can print metallic gold or silver dry ink, CMYK and clear dry ink in a single pass. With two in-line specialty dry ink stations, the new press will enable users to create applications with spot colors, metallic and mixed metallic gradients, and specialty enhancements. Gold and silver dry metallic inks can be used on their own or layered under or over CMYK to create unique iridescent palettes. A layer of clear dry ink can also be added for an extra touch of dimension or texture.

Xerox believes that this gives print providers an immediate competitive edge in the growing digital print enhancement market, where, according to a recent independent research study, printers' profit margins for such embellishments can range from 50% to 400%. And, based on the positive response and enthusiasm among the printer attendees at the Xerox event, many seemed to agree that embellishments can be a game changer.

One strong believer is David Tobman, owner of Automation Printing in downtown Los Angeles, who ordered the first publicly announced Iridesse press to be installed in the U.S. at his 30,000-sq.-ft. production facility. Tobman said he's not at all afraid to be an early adopter. A fixture in Southern California for 69 years, his shop was one of the first printers in the country to order a Xerox 9200 in 1975 and, in 1995, was the first LA printer to install an Agfa Chromapress - the 10th one sold in the U.S. The 20-employee company, which caters to designers, schools, nonprofits, utilities, architects and financial verticals, currently operates an iGen 4 digital press with matte dry ink capability.

Like these past investments that ultimately helped to open new doors for Automation Printing, Tobman is similarly convinced that the Xerox Iridesse press will be a game changer for his business by creating new market opportunities such as true metallic looks on uncoated stocks, higher productivity and turnarounds, combined with lower click charges. "Unfortunately, in our industry, everybody has the same types of equipment," Tobman said. "The Iridesse will open up new applications for me that I never had before. [For example,] we do a lot of look books. They're seeking something different."

Another strong proponent of the Iridesse press is Glen Robins, sales director of London-based IPW1, whose company has served as the customer beta site for the past several months. Robins participated in a panel discussion during the "Color Reignited" event, along with Jay Mandarino, president and CEO of C.J. Graphics in Toronto (who recently installed iGen 5 digital presses equipped with matte toner; extended color gamut orange, blue, green, white and clear dry ink capabilities; and 24-pt. thick stock kit). Shelley Sweeney, VP/GM, Graphic Arts Industry, at Xerox served as the moderator. 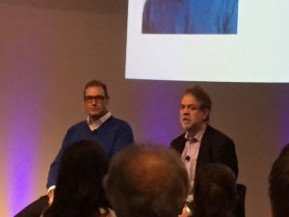 “With Iridesse, we can create remarkable and eye-catching ads, cards and posters with a simple setup and at high speeds. It’s a clear differentiator for us and it is what our customers are looking for,” Robins noted. “I’ve been in the print trade for 35 years now and I’ve never known a digital machine like it.”

Printing at speeds up to 120 pages/min. on a maximum sheet size of 13x19.2˝, the Iridesse press can run stocks from 52-400 gsm. Additional features include: 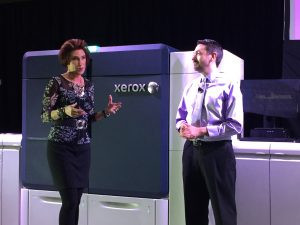 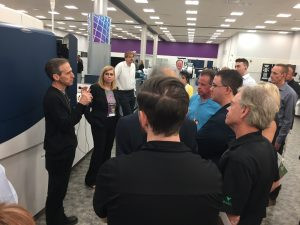 Musician and best-selling author David Usher provided a keynote about how to unlock creativity and to think outside the box. And attendees were given ample time to see live demonstrations, inspect press samples and get their specific questions answered about the Iridesse and iGen 5 digital presses, as well as learn more about Xerox workflow offerings.

“Iridesse can do things no other digital production press can do, but it’s what it can do for our customers that’s most important,” Mehta said. “We created the press to produce these special effects and digital enhancements cost-effectively and in a simplified workflow so our customers can seize the market opportunity and grow their businesses.”