LOUISVILLE, Ky. — July 10, 2017 — As a generation of skilled press operators retires, many managers at leading graphic communications firms and in-plant departments struggle to find qualified replacements. To help fill that void, Xerox and Electronics for Imaging (EFI) once again partnered this year to support the SkillsUSA Championships, which were held June 21-22 at Louisville’s Kentucky Exposition Center. 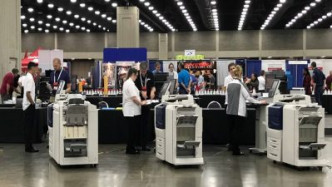 Students compete for top honors at the 2017 SkillsUSA Championships.

About two dozen of the nation’s top high school and college-level graphic communications students competed in the championships for top honors in graphic communications skills. They were among more than 6,000 of the nation’s best career and technical education students — each the winner of a state contest — who participated in 100 hands-on SkillsUSA skill and leadership championship competitions that took place in an area the size of 20 football fields.

“You have to be here to truly understand the impact SkillsUSA is having on America's growing skills gap,” said Dan Wheeler, chair of the SkillsUSA Graphic Communications Technical Committee and owner of DK Wheeler Training and Consulting Services. “Specifically, I believe the investment in education is a lifeline to closing the skills gap in printing and showcasing the fact that print of all types is indeed alive and everywhere.”

The SkillsUSA championships have been held since 1967 by SkillsUSA, a national partnership of students, teachers and industry representatives who seek to prepare today’s students to be tomorrow’s workers and leaders. In the graphic communications competition, which Xerox supported for the fourth time and for the second straight year with EFI, students participated in eight categories of activities, including digital press and digital workflow.

Xerox developed the competition’s digital printing exercises, which included three common print jobs with setup, print and finishing components, and a written test that included creating a job estimate. Xerox also provided the six entry-level production color presses that were used in the graphic communications competition, as well as seven multifunction printing devices used in event administration and the advertising design competition. EFI provided the Fiery digital front ends for the Xerox presses, and several staff people from Xerox and EFI were onsite to support the equipment and tutor the students on using it.

“Congratulations to the winners and to everyone who participated in the SkillsUSA Championships,” said John Henze, VP, Fiery marketing, EFI. “We’re pleased that in partnership with Xerox  we’re giving the student competitors valuable experience using the state-of-the-art equipment behind the industry’s most current, cutting-edge applications.”

Fred DeBolt, VP, North American Operations, Xerox, also adds, "The SkillsUSA Championship is a great experience for the students and a valuable developer of talent for graphic communications firms and in-plant operations. By working with EFI, we’re enabling the student competitors to develop the advanced, digital skillsets that graphic communications shops are demanding.”