Xanté Digital Presses Produce Over One Billion Envelopes in 2017 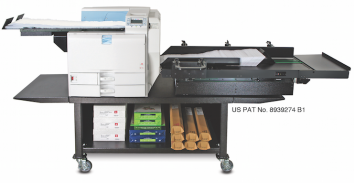 MOBILE, Ala. - February 12, 2018 - Xanté Digital Multimedia Presses and their thousands of satisfied owners successfully produced over one billion #10 envelopes in 2017. This massive volume of print testifies to the endurance and capacity of Xanté print solutions for commercial print providers and in-plants worldwide.

“Within the decade since Xanté introduced its first digital envelope press, our customers have reached many milestones in printing. This latest achievement is just the beginning of a new trend in envelope printing as we continue to innovate and improve the capabilities of our digital presses,” said Robert Ross, president and CEO of Xanté.

Xanté Digital Multimedia Presses are found in a wide range of commercial print providers, both independent and franchised, and in many in-plant operations including schools and universities, hospitals, manufacturers, and e-commerce. The Impressia Digital Multimedia Press is the overwhelming choice of print providers for profitable short-run printing with its ability to produce full color envelopes for as little as one penny per impression. The innovative iQueue workflow software that powers the Xanté digital presses enjoys widespread popularity as the easiest to learn, most full-featured, and least costly to maintain production workflow application available to print providers.

Xanté Digital Multimedia Presses and iQueue workflow software are available directly from Xanté and through a vast network of Xante dealers worldwide.