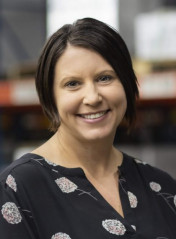 “Brianne has a strong understanding of the key aspects of human resources and has performed at a high level since she joined Worzalla,” said Jim Fetherston, President and CEO at Worzalla. “I know that she will fill this new role with confidence and ingenuity, and I hope the community will join me in congratulating Brianne on this promotion.”

While serving as Director of Human Resources at Worzalla, Petruzalek has managed associate onboarding, training, and hiring initiatives, which have generated a 30% increase in Worzalla’s workforce. Most recently, Petruzalek led a special taskforce to assess risks posed by the coronavirus pandemic and implement policies to ensure a safe work environment for Worzalla associates.

As VP of Human Resources, Petruzalek will be engaged with management to develop strategies to improve efficiencies, service, and overall success at Worzalla. She will also serve as an elected Officer of the company.

“It’s been a highlight of my human resources career to work at Worzalla, and I’m thrilled for the opportunity to serve the company in this new capacity,” said Petruzalek. “At the heart of any company is the people who work there and undoubtedly we have many of the best in the industry. I look forward to continuing to develop strategies and work with leaders throughout the organization to recruit and retain the talent needed to ensure Worzalla remains a top printing partner to our many publishing customers.”

In addition to her current role at Worzalla, Petruzalek is also an adjunct instructor of Human Resources Management at Mid-State Technical College. She holds a bachelor’s degree in Human Resources Management from the University of Wisconsin-Eau Claire and a master’s degree in business administration from the University of Wisconsin-Oshkosh. Originally from Phillips, Wisconsin, Petruzalek has lived in Central Wisconsin for nearly 20 years. In her free time, she enjoys spending time with her family, including her husband, four children, and Boston Terrier. She says a favorite hobby of hers, naturally, is reading.