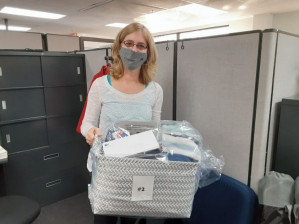 To inspire associates to support the campaign, Worzalla ran a raffle giveaway that featured various prizes such as premier parking spots and a variety of themed gift baskets.

“Worzalla associates are consistently inspired to give back to our local community, and the United Way does such important work that we are always excited to support their annual campaign,” said Brianne Petruzalek, Vice President of Human Resources at Worzalla. “We are particularly proud to support the United Way’s efforts to help children and families in need in Portage County.”

To inspire associates to support the campaign, Worzalla ran a raffle giveaway that featured various prizes such as premier parking spots and a variety of themed gift baskets. Associates contributed to the effort in a variety of ways, and Worzalla offered a corporate match to bring the total amount raised to almost $54,000.

One of the United Way’s primary focus areas is education and literacy, an issue that Worzalla cares deeply about and consistently supports. Worzalla has a history of supporting literacy and learning in the community, such as supporting area schools, donating books and sponsoring related events. Earlier in the year, Worzalla participated in the United Way’s Project Fresh Start to collect and donate school supplies for students in need. The company collected hundreds of school supplies, including purchasing 75 new backpacks for area students.

Worzalla prints many popular children’s books and is best known for being the domestic manufacturer of the popular Diary of a Wimpy Kid series. Worzalla is currently hiring for 25 positions in a variety of roles at the company, more information can be found at Worzalla.com/Careers.