World Arts Printing didn’t take the most linear path to the printing powerhouse it is today. In fact, the company started off in the 1960s as a newspaper, the Spencer Evening World. At the same time, there was a print shop across the alley called White Arts. A few decades later, there was a fire, resulting in that print shop division going up for sale. The family that owned the newspaper decided to take the opportunity and purchased those assets to start a new division. They combined the two names, and Spencer, Ind.-based World Arts Printing was born.

“Business just started expanding from there,” Matt Leach, World Arts' general manager, notes. Originally, there was a mother and father with three sons who owned the company, he says, but when the father passed away in 2007 and the mother retired soon thereafter, the sons assumed ownership of the company. In 2011, one brother retired and the company was changed to an employee-owned (ESOP) structure. The second brother later retired as well, with the third still serving as the chairman of the board today.

The newspaper division of the company was sold in 2017, which by then had grown alongside the print shop to encompass five titles. Those were all sold together so the remaining company could re-focus on the printing side of the operation.

“We were an offset shop to begin with,” Leach says. “The old newspaper press was always offset. We’ve moved into digital [printing] a little bit, but offset was always our main focus, and still is, really.” The shop recently installed a Heidelberg CX 102 sheetfed UV offset press, in addition to its Heidelberg SM102, Komori L240, and KBA Rapida 75 presses. It is also running Ricoh 901 and Konica Minolta 1085 digital presses as well.

So how has World Arts Printing continued to grow the commercial offset operation? With smart moves into very specific new markets. “We’ve been working on diversifying our offerings into packaging and other areas,” Leach says, “as well as continuing to do commercial printing.” 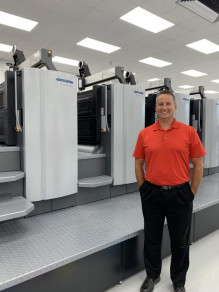 The shop has continued to invest in new equipment, including the five-color CX 102 UV offset press that allowed it to expand into printing on substrates such as plastic. While that highly automated press, in particular, has only been on the shop floor for about nine months, Leach notes that packaging, in particular, is an area the shop is looking to get deeper into as they get more comfortable with the new press and what it is truly capable of doing.

While offset does remain the focus, World Arts Printing hasn’t ignored other technologies. Mailing and variable data printing are both services that Leach notes the shop has expanded into in recent years.

“We started to offer mailing, and variable data mailing, as well as fulfillment,” Leach says. “No wide-format, though — we’ve looked, and everyone else is doing the same thing, so we decided that market may be getting a little saturated. Our board made the decision not to go in that direction.”

Beyond expanding its production capabilities, World Arts Printing is also looking to expand the vertical markets it serves. Leach notes that medical printing, in particular, is one place the shop sees huge growth opportunities, especially with the ability to print on a wider range of substrates with the UV press, which opens up pharmacy and other medical labeling options.

“I’d say we already do a fair share of pharmacy work, but since we got the new press, we’re focused on the commercial end of that market,” Leach says.

“And we’re doing more four-color commercial work — direct mail, posters, etc. There is a lot of potential in this, and in the packaging world, but I also see potential in college and university work as well.”

The future looks bright for World Arts Printing, with Leach noting that a marketing campaign is planned for the first quarter of 2020 to help promote new capabilities and help generate new business opportunities. He doesn’t see any additional equipment investments in the shop’s immediate future, after the recent installation of the Heidelberg CX 102 UV offset press in 2019, but he is always on the lookout for ways to continue to diversify and grow the business.

What is an ESOP?

While it’s not alone in going this route, World Arts Printing is one of only a handful of print shops across the country structured as an ESOP — Employee Stock Ownership Plan. But what, exactly, does that mean?

In the simplest terms, an ESOP gives every employee who works in the company an ownership stake as part of the benefits package. Essentially, this makes the workers of the company its shareholders as well, which in turn can lead to a more loyal staff who are dedicated to the success of the business.

Like with World Arts Printing, most ESOP structures are formed when a business, usually family-owned, starts to look at succession plans. Often the owner is retiring, and either has no heirs interested in taking over, or the family is looking to step back. They are generally set up as trust funds, which are funded with the newly issued shares, with cash put in to buy any existing shares, as well as by borrowing money to purchase existing shares.

The ESOP then becomes part of every worker’s benefits package, with the company getting a variety of tax benefits for the structure, and employees receiving dividends, often annually and tied to their vesting structure based on how long they have been with the company.

The idea behind an ESOP structure is not only to reward loyal employees by giving them a stake in the company, but also to encourage them to participate in the growth of the company.

Since all proverbial boats rise together, everyone is on board to find new opportunities to grow
and expand.

Often the management structure is set up as a board of directors in an ESOP. In World Art’s case, the one former owner still involved in the company stayed on as the chairman of that board. But this structure also gives employees a voice as to what new technologies or equipment are invested in, how those investments are handled, and what new directions the company should move in — all helping create buy-in across the board from the very beginning.

ESOP structures aren’t necessarily the right choice for every print shop looking toward the future, but they are a strong option, and World Arts Printing demonstrates how successful it can be when handled correctly.