World Arts of Spencer, Ind. expects to double the company’s capacity due to the advanced makeready technology on the Heidelberg Speedmaster CX 102-5+L, which will help increase efficiency on the company’s short run jobs.

According to Matt Leach, general manager at World Arts, “With our previous press, we were really falling behind on makeready times, which was making it difficult to satisfy our short run work. On our old press our makeready times were averaging anywhere between a half hour to an hour. Thanks to the Speedmaster CX 102, we can set up jobs in a third of the time, which is incredible.” 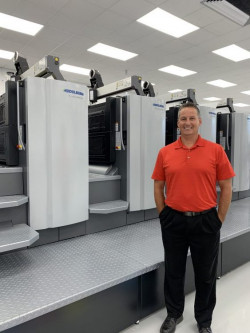 The technology impacting the makeready speeds includes Prinect Inpress Control 2, which is the industry’s leading inline spectrophotometer that measures and controls color and registers on the fly at any speed – delivering the first measurable result in less than 60 sheets. Shorter makeready times are also achieved thanks to reliable and fully automatic plate changes with AutoPlate Pro, which controls precise plate feeding and identification for exact and fast registration. During plate changes, the operator can perform other tasks while the plates are being changed.

Running 16,500 sheets per hour, the speeds of the Speedmaster CX 102 are making way for World Arts to bring more capacity into the shop, while still providing the company the flexibility needed to handle packaging, labels or high-quality commercial jobs. Equipped with “Push to Stop” technology, jobs are autonomously changed over without operator intervention and continue to print until the operator intervenes. The Push-to-Stop technology is made possible with Prinect workflow in combination with Intellistart 2, a unique integrated software system for effective job preparation, which greatly reduces the number of operating steps during a job change.

“The ‘Push to Stop’ technology is quite impressive,” said Leach. “We are able to go from signature to signature in a matter of 8 to 10 minutes, and all we have to do is just let the press do its thing.”

The Secret to Peak Productivity