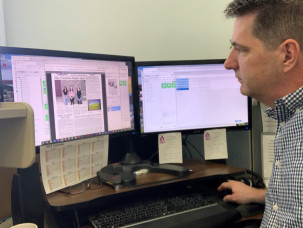 Wick Communications has chosen ProImage, an AGFA Company, to streamline its production process of five print sites into one centralized hub at their Wenatchee plant. ProImage’s NewsWayX Workflow management system and several additional plug-ins are handling the centralization, while each of the print sites will have a custom workflow to manage their unique requirements.

Since 2004, the Wenatchee production plant in Wenatchee, Washington, has been using NewsWay workflow and added ProImage’s OnColor ECO ink optimization software in 2009. With this new, centralized production process, ProImage’s NewsWayX can now be used for all sites without difficult and costly integrations, modifications, or new software.

NewsWayX controls and manages production workflow from a variety of front-end systems through to output. Using a web browser and being fully HTML5 compliant, NewsWayX is able to monitor production status from both origination and print sites - regardless of location. It supports ICC profiles, PDF as well as Bitmap workflow, imposition, and page pairing. In addition, it easily integrates with editorial and press control systems, thus providing a single, cost-effective, integrated end-to-end production solution.

Wick Communications will use Wenatchee’s existing ProImage workflow to centralize its production across five additional print sites, as each site will have a custom workflow to manage its specific requirements. Plate-ready TIFF files will be sent from Wenatchee’s NewsWayX system to TIFF Spoolers for output to local CTP devices for each instance of plate output. Load Balancing and Color Locking are supported, and TIFFs for ink presets or CIP 3 files will also be sent to individual press control systems as required by the production.

Frontiersman, Wasilla (AK), will have a remote NewsWayX Workflow and ProOut license, which is Wenatchee based, to drive two additional output devices at their Alaskan print site. The Sierra Vista Herald in Arizona handles circulations ranging from 2000 to 15,000 and uses the same configuration. The Argus Observer in Ontario, OR, the Madison Leader in South Dakota, and the Montrose Daily Press in Colorado are also tied into Wenatchee’s workflow each with two additional output devices at their respective locations. The Wenatchee plant services 80 to 100 commercial customers, with circulations ranging between 500 to over 100,000.

Benefits of a Centralized System

“One of the major reasons for our move to the centralized system is to increase our web security,” states Scott Green, Production Director for Wick Communications “Another major reason is the depth of knowledge we will have in our own company for support and thus the ability to help other print sites by using NewsWayX.”

Don Judd, IT Director for Wick Communications adds: “We were facing an end-of-life systems issue that required the upgrade of hardware, operating systems, and production software at each of our facilities. Centralizing these systems on a virtualized Hyper-V environment means significant cost savings for the entire company, as we have a much smaller digital footprint to upgrade and maintain, which also means we can utilize fewer people in fewer hours to keep things running at peak.”

When asked why NewsWayX was selected over other workflow systems, Don replies: “The use of group 4 1-Bit TIFFs gives a large advantage and allows to centralize these systems in more remote and rural areas where bandwidth availability is not available.”

Because it is based on HTML5, NewsWayX can be fully accessed from any computer platform that supports a browser. In this particular case, the software is hosted on-site but can also be installed on the AWS Cloud and hosted by ProImage. In the Cloud, Servers, RIPs and software are maintained by ProImage so versions are always current, eliminating costly upgrades.

The ease of use of the user interface and customers liking the approval portal is another major reason why Brian Koenig, Production Manager at the Wenatchee plant gives NewsWayX thumbs up. It is easy to create new customer logins and passwords for the approval managers. It thus allows customers to be self-sufficient in uploading and approving their pages after production has done the initial planning for their jobs; automating the process. Russ Dixon, Prepress Manager for Wenatchee, explains: “It is very easy for us to create new and adjust existing layout templates - especially compared to previous versions of NewsWayX. We have been successfully using NewsWay for about 20 years now, but NewsWayX is the best version so far.”

All sites will have their own login to see only their plans and pages but have all the NewsWayX features available in their own workflow. The single, integrated user interface keeps all users informed about editions and their status. Web Growth (Fan-Out) plug-in for shifting and scaling TIFF separations is also included and is one of the favorite features because of its ease of use and effectiveness, as stated by Scott Green. The centralized workflow will replace various local workflows and support previously needed at each print site.

As in any upgrade and modification, tech support before, during, and after the installation is crucial for a multi-site operation such as Wick Communications. Especially when specific customization needs are required, as it is the case with Wick Communications. “The ProImage staff has been extremely professional and very diligent in dealing with our customization needs. Every print facility has its own unique quirks to address and challenges to overcome, and thus far, the team has been responsive and helpful in the face of these issues,” says Don Judd. Scott Green chimes in: “The staff has been nothing but helpful with everything we do.” And long-time user Brian Koenig states: “Tech support has been top-notch throughout the years.”