No intelligent investment in printing technology is a gamble, but when the technology is something as transformative as production inkjet, it's fair to think of committing to it as something of a calculated risk. How justifiable a risk inkjet represents for first-time acquirers was the focus of the opening session of the seventh annual Inkjet Summit on April 8.

Conference chair Marco Boer (I.T. Strategies) acknowledged that taking the investment plunge could be "a little bit scary" for printers who haven't fully grasped inkjet's potential. But, he asserted that changes in print market demand are making the investment not only prudent, but necessary, and that putting it off might be the biggest risk of all.

Following Boer, a panel of adopters recounted successes with the technology that seemed to prove his assessment correct. 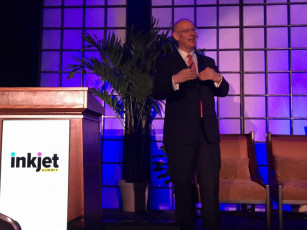 The "sobering reality," according to Boer, is that page counts are down everywhere and that their value is also in decline (although not as sharply as the printed volumes). Moreover, he said, there is tension between the industry's "pragmatic need for automation" and their customers' desire for more flexibility in what printers produce for them.

"There is not one single perfect device for doing this," Boer said. "You need a lot of devices." Among them, he continued, should be an inkjet press, because it is integral to the trend toward the kind of  automated production in which preparing the data is starting to account for a bigger share of the task than the printing itself. At the same time, it enables printers to develop "new, consultative accounts" based on programmatic selling and adding new kinds of value to the product. Transactional documents, books and direct mail are examples of applications that inkjet is benefiting in this way, according to Boer.

Something else that ought to draw printers' attention to inkjet are demographic trends that are already making it difficult for them to find people to run their conventional equipment. Declining birth rates, he said, are shrinking the labor pool to a point where "we are heading to $25 an hour labor": a situation he predicted will trigger a "tipping point" to inkjet away from offset because operators for the conventional process will have become too scarce and expensive for printers to employ.

"You have a window of about seven years" before that happens, Boer warned the Inkjet Summit audience. The good news, he said, is that inkjet has proven to be "more reliable than we had ever predicted" and that with diligent research and planning, printers can make profitable investments in it.

"It's not a risky bet," he assured the audience. "It is a pretty safe bet from the calculated risk perspective."

"Not investing in inkjet is the risky decision," he concluded.

Barb Pellow (Pellow & Partners) kept up the opening session's aleatory theme in moderating a panel discussion on whether inkjet is a good bet – the right bet – for the printing industry. The speakers were unanimous that for their companies, investing in inkjet was indeed a smart play that rewarded the careful planning each had put into the decision. They also offered recommendations for other printers now shaping inkjet strategies of their own.

Brianne Baggetta, president, The Mailworks, said that although her company produces 90 million pieces of mail per year for clients in the hearing health industry, "we are not selling them direct mail – we are selling them a solution that will help them sell more hearing aids." The company, which has enjoyed year-over-year growth in excess of 20% for the last six years, relies on high-volume Océ inkjet systems from Canon Solutions America to get the work done. This includes an Océ VarioPrint i300 acquired in 2016 and a ProStream inkjet press that is currently being installed.

Baggetta noted that installing the equipment had done more than just break The Mailworks into inkjet production. It has also helped to position the company for greater growth and efficiency by cutting turnaround times, offering expanded color and media options and eliminating excess printed inventory.

"Sell your team first and your customers second," was her primary piece of advice for first-time adopters. After securing that crucial internal buy-in, she continued, concentrate on optimizing workflows and developing sales and marketing processes that will attract the kind of volume that justifies the investment.

The Mailworks, Baggetta noted, brings in its workload entirely without external salespeople. Instead, the company uses social media outreach to generate leads that its account managers turn into ongoing customer engagements.

Founded in 1951 as Corporate Press, the Corporate Communications Group is today an employee-owned business with a data-centric marketing subsidiary and a history of investing in digital printing equipment that goes back more than 25 years.

Mike Marcian, CEO, said that the company acquired inkjet technology – specifically, a RICOH Pro VC700000 – "without a dollar of new business in mind." The goal, rather, was to migrate existing work from preprinted shells to the much more efficient white-paper-in workflow that is one of production inkjet's main attractions.

The device, in operation for about a year, has enabled Corporate Communications Group to cut job turnaround times dramatically: in one case, Marcian said, from 90 hours to just seven.  Overall production time, he added, has been reduced by more than 25%.

Partnership with vendors is the key to making a wise wager on inkjet, according to Marcian. Get to know prospective partners as well as you can, he urged, and "work with the firm that spends the most time educating you."

Consisting of six companies, the Sheridan Group is a full-spectrum provider of book, journal, magazine and direct mail catalog printing services. Paul Loy, VP of operations, said that one of its roles is to support the entire life cycles of the products it prints, switching production methods as market demand and quantity requirements change.

About seven years ago, declining run lengths prompted Sheridan Group to begin replacing its offset platforms with the HP T-series inkjet web presses that are now its digital mainstays. The company also added the finishing lines it needed to handle both book-of-one and high-volume production workflows.

Sheridan was an early adopter of inkjet technology with its initial installation of an HP PageWide T360 color inkjet web press in October 2012 at its Chelsea, Mich., facility. More recently, it added two HP PageWide T240HD inkjet web presses for fused book blocks at its Hanover, Pa., location, as well as an HP Indigo 12000 B2-format digital press for covers and case-covers for both books and journals.

A production inkjet device, according to Loy, brings a new set of mandates to a printing company. An inkjet device, he told the audience, "is not a press, it is a process," and by failing to understand how to operate it properly, "you just turned that inkjet press into an offset press."

"Having a digital press doesn't mean you are a digital printer," he counseled. "You need to know how to ingest and automate workflow before you invest in a press."

Arista Information Systems took a "deep dive into financials" in planning its investment in Xerox Rialto roll-to-sheet inkjet presses, said Leesa Wagener, VP of business operations. The company looked at 12 months' worth of cost data and questioned vendors exhaustively to measure the probable economic impact of moving from toner to inkjet in its transactional printing business, which produces 9 million bills, invoices, checks and notices monthly.

The outcome of acquiring four Rialtos – two installed, and two more on the way – has been that "monthly costs are significantly lower," Wagener said, adding that the main application has been moving about 1,000 existing jobs from shells to white-paper-in production on the Xerox devices.

"You need to do it," she urged printers who are thinking that inkjet may be the next investment they should make. To make it a success, include the entire team in the evaluation process; run test jobs on candidate equipment; visit existing installations; and "make sure the vendor you select is a real partner that you can deal with in an environment of honesty and trust."

END_OF_DOCUMENT_TOKEN_TO_BE_REPLACED
Happening Today
The Powerful Case for US Book Manufacturing