Nothing says that a printing company has to have Web-to-print (W2P) capability, but it’s getting difficult to justify doing business without it. W2P-enabled e-commerce may have been a novelty once, but it’s a core competency now — an amenity that customers expect and a sales-generating asset that printers can use to keep those clients satisfied and loyal.

That’s part of the reason why the printers interviewed for this story have embraced it. The other benefit lies in being able to channel incoming orders from online storefronts directly into production workflows. The integration, say the printers, boosts profit margins by removing touchpoints and the costs associated with them. The takeaway: any printing business not operating in this way is at a clear disadvantage to those that do.

“Automation is the single most important element in keeping a print provider operating in the black today,” says Cathy Skoglund, director of the Print & Imaging Lab, a teaching and in-plant printing facility at Arizona State University. She has automated the in-plant’s workflow with the help of two recently integrated pieces of software: the Avanti SlingShot Print MIS and the Catfish W2P platform from Infigo Software Ltd.

The integration lets the lab’s clients submit or compose files using the Catfish Web interface, which passes them through to Slingshot for estimating, imposition and other production steps in a single, touch-free sequence. Integrating W2P and MIS tools “has multiplied the benefit they provide to ASU,” reports Skoglund.

No one knows exactly when the term “Web-to-print” became part of industry jargon, but its technical roots go back to the days when dial-up modems began competing with bicycle messengers as solutions for delivering job materials to printers and trade shops.

Cliff Hollingsworth, now the general manager at Greenville, S.C.-based TruColor, remembers using off-the-shelf software to cobble together a W2P system for Consolidated Graphics around 2000. He says that when he saw EFI’s Digital StoreFront product for the first time in 2006, he told himself that if he were ever in a position to pick and implement a W2P solution, EFI’s offering would be the one.

After he joined TruColor in 2013, Hollingsworth got his chance. Digital StoreFront has been in use there under his supervision for about a year, replacing a “super clunky” former system.

Andrew Hrywnak, president of Print Three, a network of digital and commercial printing service centers across Canada, has deployed W2P software from Racad Tech at all 50 of his franchise locations. His initial experience with W2P wasn’t auspicious.

One solution he tried was “horrible,” the vendor of another went bankrupt just as he was about to sign the contract. The Racad Tech software, Web to Print Cloud, happily contrasts with these failures by giving Print Three franchisees the features and flexibility they need to keep up with their customers’ e-commerce requirements.

A printing business needn’t be big or far-flung to leverage the benefits of W2P. A case in point is Millennium Press of Agawam, Mass., which has an exceptionally sophisticated W2P capability for a shop employing just 18 people. 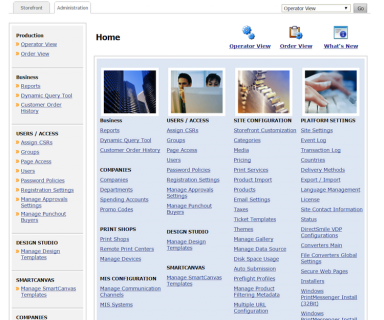 Cliff Hollingsworth, GM at Greenville, S.C.-based TruColor, has been very satisfied with the EFI Digital StoreFront W2P solution that was implemented in his shop about one year ago.

Jim Sullivan, president, uses Prinect software from Heidelberg to create an e-commerce portal that meshes with other Prinect modules for prepress, proofing, MIS and production management. The results, he says, include a 50% reduction of touchpoints in jobs submitted via W2P; fewer errors; and an easing of the workload for his small staff.

Although, as Hollingsworth observes, there’s rarely anything seamless about implementing a new technology for the first time, he and the others found that W2P made a quick and comfortable fit with their existing operations.

TruColor, which prints with a mix of offset, digital and wide-format digital equipment, uses EFI Fiery front ends as controllers for the digital devices; Hollingsworth says that it took “about a half hour” to get Digital StoreFront to shake hands with the front ends. Sullivan made a similarly smooth connection by obtaining his W2P and production workflow software from the same source.

Hrywnak reports that with the help of some “hand holding” from Racad Tech, Print Three franchisees who were apprehensive about W2P lost their fears and soon learned to rely on it.

However, getting W2P up and running is nobody’s idea of a no-brainer. Failure to implement it correctly, says Hrywnak, is the Number One reason behind most complaints that the software isn’t working as it should.

But, the payoff of doing it right can be considerable. Hrywnak reveals that Print Three was recently chosen from among 27 vendors responding to an RFP because the issuer — a print-buying organization with outlets all over Canada — deemed its W2P capability to be a “night and day” improvement over what the competition had to offer.

The customer-facing part of W2P is more complicated under the hood than printers may realize, according to Sullivan. “A simple seeming business card,” for example, can flummox the interface when a line of type hyphenates because it’s too long or when the telephone, cell and fax numbers don’t stack up the way the template wants them to.

Problems like these are easily fixed in prepress, but W2P isn’t prepress. It’s a programming environment, says Sullivan, needing preemptive software rules that anticipate errors and head them off before they can spoil the layout and frustrate the customer.

In a well-implemented W2P solution, what the customer should see is a clean and orderly space that makes sourcing printed matter intuitive and easy. Ideally, the interface should also have the kind of bespoke appearance that the Racad Tech software gives to portals created for customers of Print Three. Hrywnak says the sites look as if they were running on the end user’s own intranets.

With EFI Digital StoreFront, Hollingsworth’s customers get branded sites where they can order whatever they want with half the number of clicks required by the W2P system that the EFI product replaced. Then, Digital StoreFront keeps the customer apprised of where the job is in TruColor’s production pipeline and how long it will take to ship.

Drawing print buyers into the workflow benefits the print service provider, as well. According to Sullivan, the whole point of letting customers design business cards, etc., from templates at an online portal is that it yields a print-ready file faster than creating one from scratch at an internal workstation.

For extra quickness, he supplements the Prinect W2P software with third-party options that streamline input. One is a plug-in for business cards that lets customers pull names from a database of their employees’ personal information instead of having to key in the names manually.

A W2P solution worth its salt must be able to make a smooth handoff of information from external sources to internal production processes — otherwise, it becomes just another silo.

One of the features Hrywnak likes best about his Racad Tech W2P software is that it can talk to all of the various MIS/ERP systems in use at Print Three franchise locations. He says it also harmonizes with Xerox’s XMPie software for variable data production, which Print Three was the first franchised printing operation in Canada to adopt.

With its all-Prinect production workflow, Millennium Press has a fully synchronized W2P solution in Prinect Remote Access. The same kind of commonality exists at TruColor, where Digital StoreFront clicks with the plant’s EFI-provided MIS, PrintSmith Vision, as well as with the Fiery DFEs.

Customer convenience and workflow connectivity are good things to have, but the make-or-break question for a W2P solution is a financial one: Does it generate additional income in return for a printer’s investment? The spokesmen for TruColor, Print Three, and Millennium Press all say that, in one way or another, they are seeing an ROI.

Achieving it depends in part on getting the right type of customer to take advantage of what W2P can do. Sullivan says that when he first began offering W2P to his customers, he assumed — incorrectly — that almost everyone would want to use it.

Over time, he learned that some customers take to W2P much more enthusiastically than others and that there will always be a subgroup that would rather use anything else to place orders. That’s a distinction that Sullivan says he can live with — automating job processing and production for his W2P-friendly customers is what saves him money and improves his margins.

Print Three has deployed a W2P solution from Racad Tech at all 50 of its franchise centers, which are located throughout Canada.

Positioned the right way, “a W2P solution is an extended sale,” according to Hollingsworth. He describes the “perfect customer” for W2P as an enterprise that operates from multiple locations and authorizes large numbers of people to buy print, oftentimes incorporating some form of personalization. Organizations like this appreciate W2P systems that let them centrally monitor and control their supply-chain spending.

Hollingsworth adds that this is one way in which expectations about W2P have changed — it is now seen not simply as an online shopping cart, but as a management resource that goes hand in hand with the customer’s best practices for procurement. He says that when TruColor clients learned that EFI Digital StoreFront could give them the kind of support that the company’s prior W2P solution had failed to deliver, “they were more than happy to re-engage. We got sticky again.”

There’s no question about the payoff of W2P for Print Three. “The fastest growing portion of any of our franchisees’ business is the business they do online,” Hrywnak says. Because the Racad Tech software is designed to connect to corporate accounting systems, it can generate spending and usage reports on-demand — a courtesy that helps to establish franchisees as preferred providers and encourages customers to aggregate their print spends with them.

Printers that are not yet doing business online have valuable lessons to learn from the W2P experiences of TruColor, Millennium Press and Print Three.

Sullivan’s advice to first-time buyers of W2P solutions is to learn whatever needs to be learned “to make the software sing.” Hollingsworth recommends appointing someone “passionate” about W2P to implement and manage it. Above all, says Hrywnak, there’s no need to be fearful of making the leap to W2P, because it certainly doesn’t scare clients. A well-designed and carefully implemented W2P solution “brings value to customers — and customers aren’t afraid of paying for that value.”

The Ecosystem - PRODUCE: Making It Happen.