Installing new machinery — for instance, a faster press — may make a printing company more productive, but it won’t necessarily transform the business model on which the company operates.

Not so with Web-to-print (W2P) storefronts. These online portals for print ordering start out as customer conveniences but, over time, they drive change in what a company produces, how the production gets done, and where the most important top- and bottom-line profits come from. A printing business that commits to a W2P solution eventually learns that it must make itself as efficient as the storefronts it deploys — a mandate that no other type of print manufacturing technology imposes in quite the same way.

If this is a case of the tail wagging the dog, then the dog may never have had a more useful appendage than the one that lives in its W2P software. Four printers — two using branded commercial solutions, and two that have built their own storefront networks — talked about connecting with their customers through interactive portals and the benefits the effort has yielded. All see their implementations as works in progress that haven’t yet delivered everything they’re capable of, but ultimately will.

Of the four, the most experienced with W2P is Alexander’s Print Advantage of Lindon, Utah, a company that built its first online ordering system from scratch in 1999 and has been self-reliant as a W2P developer ever since. The reason for this, says Jeff Alexander, founder and president, is that no off-the-shelf software has ever offered the combination flexibility and features his homegrown solution provides.

Optamark Graphics, of Boston, doesn’t know what it’s like not to have storefronts: they’ve been the company’s main conduits for incoming orders since founder and CEO Tarang Gosalia first opened Optamark for business in 2011. The software on which Optamark’s storefronts are built from another one of Gosalia’s enterprises, Anything With Ink, a platform for resellers of print and promotional products.

Sprint Press Denver ventured into W2P six years ago by engaging an outside service provider to set up its storefronts. After that attempt failed to go as hoped, explains VP Mark Zwingelberg, the Denver-based company opted for RTT from RedTie Group. The template solution has been in use at Sprint Press Denver for about four years.

Of the four companies, Optamark Graphics operates the largest number of storefronts by far: 900, according to Gosalia, accounting for 60% of production volume and 75% of revenue, with about half of all of its customers using them. Bender reveals that about 25% of Bender Inc.’s customers send orders through the 85 portals it has created, generating 70% of jobs produced and up to 40% of monetary value.

At Sprint Press Denver, utilization of the company’s 12 storefronts is modest: Zwingelberg says they’re currently bringing in 2% of volume and 5% of revenue. But, he points out that customers who use the portals have increased their volumes by 50%, thanks to the ease of ordering that the storefronts give them.

Print orders from the 80 storefronts Alexander’s Print Advantage maintains for large, multi-location customers represent about 10% of the company’s business. But that share, notes Alexander, is the smallest piece of the value derived from the online technologies that he and his team of 11 developers and customer support personnel have put into place.

Alexander explains that after seeing an initial growth spurt with online storefronts, the company realized that a bigger opportunity lay in automating production for customers it wouldn’t need to create portals for in the first place. Instead, adding application programming interfaces (APIs) to their existing online stores or apps made it possible to gather job orders submitted at these locations and redirect the specs to Alexander’s Print Advantage for printing and fulfillment.

A publisher, for example, might route its incoming orders for photo books to the print shop in this way; so might a provider of dental practice management software that offers to print appointment reminder cards for its customers. Alexander estimates that 60% to 65% of the company’s overall volume and revenue comes from this part of its online business.

Each of the four companies has its own good reasons for preferring the storefront solution it has chosen.

Ease of setup, “completely streamlined” performance and an Amazon-like experience for customers are the chief merits of RedTie RTT, according to Zwingelberg, who plans to integrate it with the Tharstern MIS software that Sprint Press Denver has just installed.

Besides its harmony with the EFI Pace MIS, Bender appreciates Digital StoreFront’s versatility and robustness. With it, he says, “we can move in a lot of directions. It’s exciting to me to have options to work with.” The EFI product, he adds, “has never failed me.” 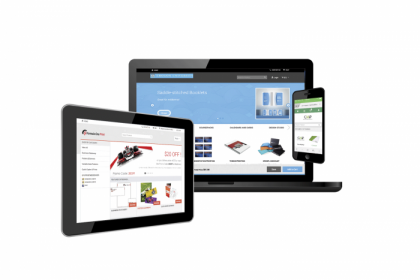 But adopting it brought the realization that “we had to make ourselves more efficient before we could sell online systems to make our customers more efficient.” This meant occasional “headaches” from having to adjust internal workflows and making sure staff understood how their job routines would change as Digital StoreFront took over the “minute tasks” of order entry and job processing.

Relying on storefronts also made clear that the nature of the work they attracted would change some assumptions about how to make money with them.

The portals, Bender explains, tend to bring in “smaller, digital-type projects that are worth less money,” although they sometimes channel customers’ requests for offset work as well. But the profit margins on the lower-priced work hold up “because we don’t have to touch the project” once the storefront hands it off, fully prepped, to the shop’s production workflow. This encourages Bender Inc. to pursue more work of this kind now that it has a way of producing it with maximum efficiency.

‘Talk to the Printer’

Gosalia says that as a print broker and a print manufacturer, he found it difficult to find ready-made software capable of handling detailed requests from customers on both sides of his business. He also needed a way to provide W2P support to the network of trade printers that produce the bulk of the work Optamark Graphics delivers. This prompted him to assemble an in-house team of 10 programmers to build software that could generate custom quotes, “talk to the printer,” and seamlessly connect buyers with vendors.

SmartCanvas is a Web-based product design tool that enables administrators within EFI Digital StoreFront to create templates for a variety of products.

Using React, a JavaScript tool for developing user interfaces, they wrote code for Anything with Ink, which networks brokers, distributors and agencies with suppliers. Anything with Ink’s other application, says Gosalia, is providing W2P and CRM (customer relationship management) functionality for Optamark Graphics, which uses it to create storefronts free of charge for its customers.

Alexander’s Print Advantage launched the first iteration of Divvy, its storefront platform for multi-unit organizations and franchisees, in 2000. It had become obvious, points out Alexander, that available W2P solutions looked and functioned exactly like software “developed by somebody who just creates software.” They weren’t, in other words, nearly print-specific or flexible enough to be useful. It also would have been too expensive to white-label (rebrand) an off-the-shelf product for individual customers “even if you could white-label it,” he adds.

Divvy helped Alexander’s Print Advantage reposition itself as a technology provider and a problem-solver at franchise expos and other marketing events the company takes part in. Alexander says that while its user interface isn’t “flashy,” Divvy is easier to set up, more customizable and richer in features than the commercial W2P solutions he’s tried.

Offered the time- and effort-saving convenience of online storefronts, printers’ customers should be expected to take full advantage of them — and many do. Bender says he’s always surprised at “how willing customers are to adopt this change.” He thinks it’s because many businesses are struggling to overcome inefficiencies and consequently see W2P as a means to that end. By setting them up with storefronts, he notes, “we bring connectivity to another business.”

All agree that the “ideal” customer for W2P connectivity is one with multiple locations to support and an adequate volume of work to produce. A centrally served storefront network, according to Zwingelberg, simplifies inventory management by giving the customer “one point of reference for all of their materials.” Consistency of branding also becomes easier to preserve when all of an organization’s printing comes from one source through one standardized channel, Bender says.

Any customer can have a storefront, but from the printer’s point of view, it’s more desirable to create portals for those who’ll make substantial use of them than for those who’ll send just a trickle of work through the pipeline. At Sprint Press Denver, reports Zwingelberg, it’s been necessary to “weed out” accounts that aren’t a good fit for online interfaces because they lack sufficient print-on-demand or inventory management requirements. “If they don’t have a need for print, they just won’t be a good customer” for W2P, Alexander concurs.

To the definition of the “ideal” customer, Gosalia adds those “who have a need for hand-holding as well as commodity ordering.” He explains that while storefronts can give clients the convenience and transparency they want, there’s still room in the business for personal relationships — especially when a job is too complex for a storefront transaction to handle. In such cases, Gosalia says, “we’re very much about meeting our clients at their offices and doing consultative selling.”

Zwingelberg points out, however, that selling can be the “biggest struggle” a print shop will face as it implements W2P. A sales rep who is expected to promote storefronts, he says, must be as knowledgeable about them as the programmers who built them. Nor should storefronts be perceived by the sales force as competitive threats. The shop can avoid this, Zwingelberg contends, by refraining from turning storefronts into “house accounts” that sideline the reps and constrain their commissions.

Gosalia thinks printers risk disappointment with W2P when they fail to grasp the full range of benefits that storefronts can bring to their customers — an understanding he sees as “severely lacking” in the industry. Shops that want to implement W2P successfully, says Bender, “have to go in knowing it’s a process” that will need time and patience to develop. “Step back, start small and build it project by project,” he advises.

A printing business that expands the right way into W2P storefronts and related production services can do so in anticipation of reward. Alexander, for example, foresees a day when as much as 90% of his company’s business could originate from the online capabilities it has developed.

“I’m excited that this industry has technology it can utilize” to make customer ordering and internal processing more efficient, Bender concludes. Failing to leverage it, he asserts, means “you’re doing a disservice within your plant.”

W2P Industry in 2022: Challenges and Opportunities