Vivid Will Use drupa to Introduce Feeder, Laminator, Range of Special Effect Foils 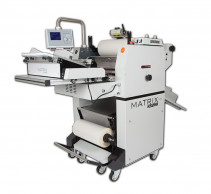 Matrix Auto-Feeder
The new Auto-Feeder can be fitted to the Matrix Laminating Systems and frees up operators to complete other jobs quickly and efficiently.

With the Auto-Feeder the Matrix gives customers an even greater return on their investment. Prints can be loaded ‘on the run’ for non-stop operation.

High-Speed Matrix
The Matrix Laminators will also see a new high-speed model added to the range, allowing larger volume runs to be laminated faster and saving on production costs by finishing in-house.

The new system runs at up to 66 ft. a minute and will also be fully compatible with the new Auto-Feeder.

Detailed, quality foiling prints can be created in-house, without expensive set-up charges and traditional block foiling, which represents a fraction of the cost compared to outsourcing.

Vivid is adding to their Boss print effect range, with holographic films. This opens many new avenues of income for Matrix users, including security print, vouchers, personalized items & tickets, as well as the packaging and label markets.

The Matrix is the most cost-effective digital laminator on the market and is a far more valuable must-have system for the modern day digital printer. With lamination, foiling, Spot UV and new metalized print effects, 4 separate avenues of income make the Matrix a real option to produce incredible finishes, adding even more value to print jobs.

Metalized effects open up new markets for wide format printers. These can be overprinted onto UV or solvent-based prints. Customers working in the point-of-sale, packaging and decorative markets will benefit by saving money every time they create a large format product.

Visit the Vivid team in Hall 6 to see some of the most advanced, innovative and cost-effective laminating technologies. Vivid will be in Hall 6 of Messe Düsseldorf on Stand No. D58.

About Vivid Laminating Technologies
Vivid is Europe’s leading designer and manufacturer of award-winning laminating systems. It has  been supplying systems and consumables to the print industry since 1987 and currently export to over 50 countries worldwide.

About drupa
drupa is the largest printing equipment exhibition in the world, held every three years in Düsseldorf, Germany.