When VISOgraphic commissioned their first RMGT in the fall of 2017, the new 10 Series press had to absorb the output of three legacy Heidelberg presses. The pressure was squarely on VISOgraphic's Team to rethink possible. “We were amazed at how quickly we could move dozens of projects per day onto our new RMGT press, but after two years and 60 million impressions it was clear that our rapid growth would soon exceed our capacity,” states John Dahlke, chief operating officer. “So, we decided to order an RMGT 9 Series press to meet our customers demand for high quality LED-UV cured print projects. The footprint, print quality and efficiency of the new press fits perfectly into our all-RMGT pressroom. We are proud to be the first printer in the United States to have both the RMGT 10 series and 9 Series combination.” 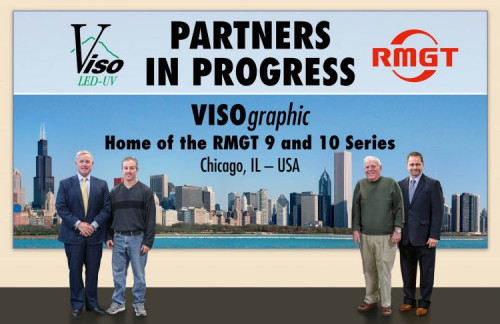 How does a commercial printer in the highly competitive Chicago print market grow so quickly? One key to VISOgraphic’s rapid rise has been the clear vision that the Dahlke family had for their company, starting well before their first RMGT investment in 2017. They knew that in order to compete and succeed they had to bring a high degree of value to every customer engagement. Under the leadership of Bob Dahlke Sr. and his two sons, Bob Jr. and John, the VISOgraphic team manages every aspect of their customer’s projects from conception to completion.

“We’ve found that a highly personal approach builds great customer relationships that last for many years,” says Bob Dahlke, Jr. “When we added the tremendous advantages of LED-UV curing and vastly improved print quality that our RMGT 10 Series press provided, our growth really took off. The RMGT brand has been a critical growth driver for our company. Above all else, RMGT gives our employees state of the art equipment to make their jobs easier, while offering our clients a better product offering – all at a better price --- with more speed and accuracy. An overall winning value proposition for our clients.”

Practically overnight, John Dahlke’s pressroom team began production of extremely high value-add products, such as: soft-touch with high-gloss spot UV for high-end travel industry projects; chemical emboss applications for corporate presentation pieces; and, CR80 plastic cards for very long run, direct mail programs. “Since we use LED-UV curing for all these projects our learning curve was very short and our vendors constantly brought us new coating materials to enhance our projects,” observes Dahlke. “Frankly, I believe we were testing some of these materials for the first time in commercial use, but time after time the jobs just ran fine.” The RMGT 10 Series press that was installed in 2017 is equipped with a special package that allows plastics to run trouble-free.The AMS Spectral LED UV curing system has passed every test of curing inks and coatings at full press speed of 16,200 sheets per hour.

VISOgraphic has always provided an impressive on time and on budget track record with their quality conscious customer base. Understandably, the decision to funnel the work of three legacy presses onto one platform was initially a concern in the fall of 2017. John Dahlke remembers, very well, the day he really relaxed. “We were backed up with a lot of new work at the beginning of 2018. I knew we had made the right decision purchasing the RMGT 10 after we had one of the biggest production weeks in the over 70-year history of our company. In that one-week period, we printed 1.3 million impressions with 120 make-readies representing all types of work. We were printing on stocks ranging from 40# offset to 24-point cover — from one color to six color jobs with spot and UV coating. We exceeded our own lofty expectations of the press and we had only been running the press for a few months at the time.” 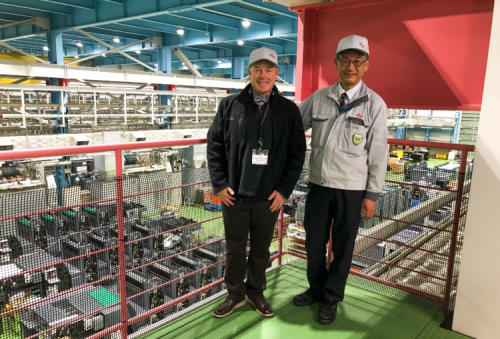 The ink was barely dry on VISOgraphic's sales contract when Bob Dahlke was invited to tour the RMGT factory in Fukuyama, Japan. The RMGT Management Team rolled out the red carpet for another second time RMGT customer. “After having two plus years of round-the-clock production success under our belts, I knew what a great press RMGT builds. Seeing the clean, well-organized and productive factory solidified our decision to moved ahead with another RMGT. Not only did Katsushi Hirokawa, President of RMGT, explain the manufacturing process for building our new press, but then his team showed me every step in the manufacturing process on the factory floor. I was blown away by the build quality and lean manufacturing process being used. They even showed me sheets being printed during testing on a press that was nearing completion. We can’t wait to see our new press roll up its first jobs on our floor."

The new RMGT 9 Series press that VISOgraphic ordered from Graphco at the end of 2019 will feature RMGT’s well known Insta.Color makeready technology, a revolutionary new AI calibrated feeding system that optimizes throughput automatically, and the latest automation package from the leader in the eight-up press market. “The VISOgraphic, RMGT and Graphco partnership has been rewarding for everyone and we look forward to helping our friends at VISOgraphic reach their ambitious growth goals,” states Derek Gordon, Graphco’s Midwest Regional Manager. “Being aligned with such a great organization has been a real pleasure. It will be exciting to see how far and how fast our friends at VISOgraphic will grow their business with their all-RGMT pressroom."