Continuously seeking new ways to streamline its production, Victor Envelope was one of the first envelope manufacturers in the country to bring offset printing in-house in 1979 and one of the first printers in Illinois to become G7 certified over 15 years ago. The company, who was struggling with the inefficiencies of its previous workflow, decided it needed to reduce and automate many of the human touch points that were occurring prior to printed files arriving at press.

“We faced a lot of challenges with our old software,” said Kent Gundlach, President of Victor Envelope, “but one of the key issues we were facing is that customers were requesting a more secure way to submit their files to us.” With its previous workflow, customer files would be submitted to a sales representative and then to a traffic coordinator before they even reached the prepress department. “There was no preflighting prior to prepress receiving the file,” said Gundlach. “A lot of time was wasted before we could realize if there was anything missing or incorrect in the file.” With Prinect Production Manager, customers are given a secure portal to directly upload their files, and preflighting is done at the time of submission – saving Victor Envelope both time and human interaction with the file.

In addition to secure file submission, Victor Envelope was also struggling to automate the creation of nested layout files for the thousands of envelope dies the company uses. “We tried with our old software for many years to do nested layouts, but it never worked like it was supposed to – it was always a disaster,” said Gundlach. The process was further complicated by Victor Envelope’s CutStar sheeter on its XL 106, which allows each job to be printed with a custom sheet size. As a result, the company’s prepress department would have to manually do much of the work by hand and would further delay files from being printed. “Prinect has completely streamlined our workflow,” said Korie Cooper, Prepress Operator at Victor Envelope. “The layouts are so much simpler and quicker now. Prinect has really helped automate that entire process.” 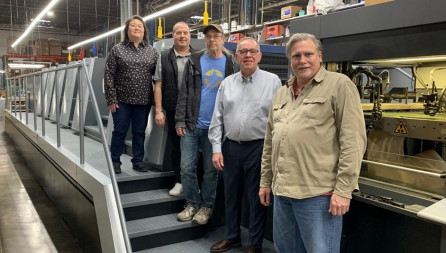 “Less Hoops to Jump Through”

In recent years, the company, who produces primarily direct marketing envelopes, has seen an uptick in higher end designs for its envelopes – with jobs going from two-color work to now all the way up to six colors. Previously, Victor Envelope needed additional plug-ins for adding color bars to its layout files before they could be transferred to one of the company’s Heidelberg XL presses or its Versafire digital press. “Everything is now under one umbrella,” said Henry Bartsch, Prepress Operator at Victor Envelope. “With the Heidelberg solution, our team doesn’t need to manually adjust the file. There are just less hoops to jump through and less steps in the process. I can easily RIP files to whatever output device I choose.”

Victor Envelope has also been impressed with the level of support it has received from Heidelberg since transitioning from one workflow to another. “It’s never easy changing workflows,” said Gundlach, “but Heidelberg has made it easier for our team. If we call in with a question, we have an answer the same day.” Currently, the team at Victor Envelope is working with a Prinect Application Specialist to integrate its offline laser cutter within Prinect. “I’ve been a Heidelberg guy for a long time,” said Gundlach. “I’ve always been impressed by the people I’ve worked with. The company is never standing still – they’re constantly coming up with ‘what’s next’ and developing the newest innovations for our industry.”