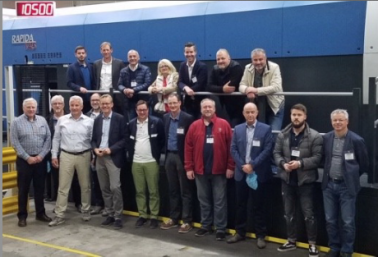 A group of nearly 20 representatives from the German printing organization known as VDMB visited Everett Graphics, a leading folding carton printer headquartered in Oakland, Calif., and saw its duo of highly-automated large-format presses in action.

A group of nearly 20 representatives from the German printing organization known as VDMB (Verband Druck und Medien Bayern), which had been on a week-long trip traveling to the Silicon Valley of California visiting progressive firms both in and outside the print industry, spent half a day on Thursday, May 9, at Everett Graphics, a leading northern California folding carton printer headquartered in Oakland, Calif. The group, comprised of owners and CEOs of Bavarian printing firms, witnessed an enlightening tour of Everett’s duo of highly-automated enhanced performance Koenig & Bauer presses: a Rapida 106 41-inch and Rapida 145 57-inch large format press in action. Whit Everett, president and CEO of Everett Graphics, welcomed the group to his 82,000 sq ft manufacturing facility, along with Marcus Schoen, Koenig & Bauer (US) sales manager.

The group arrived at Everett’s headquarters along a quiet tree-lined industrial area not far from the San Leandro Bay. This premier designer and manufacturer of quality packaging primarily catering to the food industry is situated in a modern two-story gleaming white facility where the firm is fully committed to being environmentally responsible and adhering to strict government and state regulations. Everett has consistently geared its business strategy towards pro-environmental printing through its choice of substrates, its production technology, and its social responsibility towards its customers and its region. Schoen discussed the unique capabilities and products produced by Everett while providing a press demo for the group. The newest Koenig & Bauer Rapida 145 press allows Everett to run e- and f-fluted materials at higher speeds than ever and gives them the ability to print high quality, offset work, directly onto micro-flute substrates in large format. The meeting ended with a light lunch for the entire group.

In addition to visiting Everett Graphics, the group was scheduled to visit the most important well-known IT and high-tech U.S.-based firms such as Google and LinkedIn, where they gained insights from managers outside of the print industry to gain inspiration for their own businesses.