Printing Impressions has learned of the passing of three once-prominent individuals with strong ties to the U.S. printing industry.

Nelson Eldred died Feb. 14 in Tampa, Fla., at age 96. Born in Oberlin, Ohio, Mr. Eldred majored in chemistry at Oberlin College, and went on to receive a Master's degree and a Ph.D. in organic chemistry. During his career, he was employed at Union Carbide and the Graphic Arts Technical Foundation (GATF), among others, and was inducted into the then-GATF Society of Fellows in 1995.

According to his obituary, Mr. Eldred retired to Florida in 1989, and remained active by giving seminars on printing chemistry worldwide. He was also an accomplished pianist and competitive rose gardener, his obituary noted. Mr. Eldred is survived by his wife, five children and six grandchildren.

Walter Hantscho passed away Nov. 9, 2017, at age 82 in Los Fresnos, Texas. Mr. Hantscho and his family were very significant players in the web offset press industry and thousands of printers around the world will remember their days outputting printed products using Hantscho presses. His father, George, was an immigrant from Germany who worked for and eventually managed manufacturing for the Webendorfer Co. in Mt. Vernon, N.Y., the pioneer in web offset press design. Sometime following World War II, George Hantscho split off from Webendorfer (which later was purchased and renamed as ATF (American Type Founders) and established his own design and manufacturing company in Mt. Vernon, N.Y.  Hantscho designs evolved quickly. 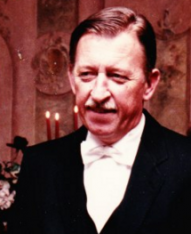 An agreement was reached with the Miehle organization, which had been a strong competitor in the North American sheetfed offset press market, to sell the Miehle-Hantscho web offset press. That arrangement was short-lived, though, and a series of Hantscho models ensued, including the series of Mark models from the early Mark II up through the Mark XX.

Through most of the second half of the 20th century until the late 1980s, when Hantscho was acquired by the Goss organization, Hantscho presses earned a reputation for reliability and productivity. Hantscho models were actively purchased for magazine and catalog production until the 1970s but, by that time, most North American magazine and catalog production had shifted to higher speed, double-diameter offset models. However, Hantscho continued to dominate the book and financial printing markets until the sale to Goss.

Walter Hantscho worked for the George Hantscho Co. from his earliest days and succeeded his father as president sometime in the 1960s, remaining in that role for a quarter century until the sale of the company. At that time, he became a consultant for the GATF for a short time until he was recruited by MAN Roland to be president of its North American companies. These companies, including Wood, Scott and R.Hoe acquisitions, had been active in the North American newspaper press market. Also included was the Ashton press company, in Quebec, a major player in the business forms press market. Mr. Hantscho organized these companies under the MAN Roland umbrella and oversaw the introduction of heatset publication and commercial press models derived from MAN Roland German press designs. He retired from MAN Roland in the mid-1980s.

Gilbert Bachman died at his home in Boca Raton, Fla., on March 4 at the age of 91. According to Mr. Bachman's obituary, he graduated from Miami High School at age 16 and was accepted into Georgia Tech's mechanical engineering program. Mr. Bachman's career in the printing industry began in 1948 with Atlanta-based Dittler Brothers when he was hired as an assistant production manager. He rose through the company ranks to eventually become chairman, CEO and the majority shareholder.

Mr. Bachman built Dittler Brothers into a national printing company that produced instant lottery tickets, promotional scratch-off promotional games for companies like McDonald's, hotel guides and airline timetables. In 1983, he sold the company to Southam Inc., a Canadian publishing conglomerate, his obituary noted. Dittler Brothers was later sold to Banta Corp. in 1996 for about $64 million in stock, according to Bloomberg News. Banta, in turn, was acquired by Chicago-based RR Donnelley in 2006.

Mr. Bachman also served as a former president of the Graphic Arts Employers of America and the Research & Engineering Council. He was inducted into the PIA Ash Khan Society in 1979 and is survived by five children, 13 grandchildren and eight great-grandchildren.