Need for Print Speed in Selden
The Minuteman Press franchise in Selden, N.Y., is a full-service digital print, design and marketing center helmed by Bill Passeggio. It has five employees — including a full-time pressman and graphic designer — and has been around for 13 years. It churns through at least one million sheets of paper per year. But to stay competitive, it needed faster digital machines — in black and white, as well as color — with high-quality printing and problem-free bindery functions such as booklet finishing, including tight fold, saddle stitching and trimming.

It contacted four vendors, including Konica Minolta, and chose Konica Minolta, according to Passeggio, "because of its relationship with Minuteman Press International, its pricing, quality output and dependable service." Passeggio’s clients include large institutions such as Suffolk County Community College and Stony Brook University, who use Minuteman Press of Selden for high-volume jobs such as course outlines and PowerPoint presentations.

Over the past eight years, Passeggio has used various Konica Minolta bizhub models, including (most recently) the C7000, C8000 and C1085 digital presses. "We were able to become extremely competitive in the marketplace due to our ability to rapidly turn around jobs with a quality product at reasonable prices," Passeggio explains. "At the end of the day," he concluded, "Konica Minolta has proven itself to be the most honorable and reliable company of its kind that I have ever dealt with during my printing career."

Brian Sisti, Minuteman Press International area manager for Long Island, states, "We work hard to support all of our franchise owners including negotiating some of the best possible lease rates on digital printing systems from manufacturers like Konica Minolta." He adds, "Our mass purchasing power and long term relationships allow us to make sure our owners get the best deals that they could not get on their own." 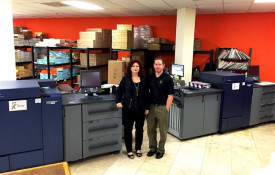 Turning up the Print Volume in Delray Beach
Matthew Perry owns his Minuteman Press franchise in Delray Beach, Fla. With 13 employees and a growing center that pumps out everything from postcards to manuals, Perry was looking for new digital printing solutions to help manage high volume. According to Perry, he chose Konica Minolta for four reasons:

Perry purchased two bizhub PRESS 1100s and one each of the bizhub PRESS 1250, bizhub PRESS 1050 and bizhub PRESS C7000 over the past five years. “We purchased the 1250 because of how robust its booklet-maker options are,” Perry comments. “The post inserters hold a plethora of paper; the booklet maker can staple an unbelievable amount of pages and it can still face trim it. Konica Minolta also includes staples, which is nice because, when you are printing more than 300,000 black-and-white prints each month on each machine, the cost of copy machine staples can surprise you at the end of the month.”

Jeff Robey, Minuteman Press International regional VP for Florida, notes, “Matthew Perry and his team at Minuteman Press in Delray Beach have done a fantastic job purchasing the right equipment at the right time." He adds, “We are proud to make the latest innovations by Konica Minolta more affordable for owners than they would be if they were independently owned and not part of the Minuteman Press franchise system.”

According to Perry, the implementation of the Konica Minolta solutions has produced several benefits for his company. “These new machines cannot be compared to their older models,” he offers. “Huge improvements have been made. We practically eliminated reruns due to streaking or erratic registration, and machine down times have been drastically improved. All this has significantly decreased our need to rerun jobs, which can be very costly in a busy shop.”

Perry foresees future opportunities to continue working with Konica Minolta. “I am considering purchasing the envelope printer for both our black-and-white and color machines,” he shares. His overall assessment of his partnership with Konica Minolta has “been excellent,” Perry says. “The company works very hard for you – like a partner – which is really great.”

A 2021 Innovator of the Year: Spectrum Printing