ROLLING MEADOWS, Ill. — August 15, 2016 —Longtime flexographic shop Triangle Label of West Chester, Ohio, has achieved major production savings in the first year since it invested in a Screen Truepress Jet L350UV inkjet label press. Proud of its parent company’s (BGR Inc.) history and its own high standards of quality, Triangle Label did not put the brakes on forward motion when it came to seeking out ways to reduce costs and increase flexibility, maintaining the product excellence for which the company is known. 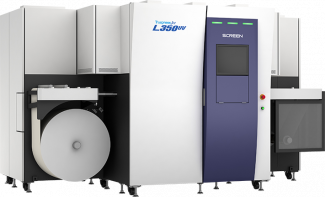 “The L350 has exceeded our expectations,” comments Operations Manager Scott Kneer. “We thought initially that 15,000 ft. would be our sweet spot. With the Screen, we have run over 100,000 ft. and 3.6 million labels on one order. We are able to run much more material now.”

The L350 gives Triangle the versatility its customers require. “One of the biggest selling points with the L350 is that we do not have to top coat. We just run it and achieve good adhesion results,” Kneer says.

Traditional flexo printing calls for time-intense makeready and clean up. “Up-time versus down-time is a major plus with the L350 compared to flexo,” Plant Manager Tom Hagedorn shares. “The set up time has gone from two to four hours down to 10 minutes for both set up and clean up.

“Labor savings has been by far one of our biggest benefits. We have reduced set up and waste. With the L350 digital inkjet technology, you don’t have to mount plates or clean up ink. We’ve seen a huge savings on material as well,” Hagedorn says.

Kneer notes, “The Screen is very versatile. We have many products that call for multiple SKUs. Our intended label market niche is pretty wide open. We have lots of craft beer and craft food, for example. Some products call for 30-40 SKUs of the same size. The L350 has given us multiple opportunities to land that type of business. As a result, our retail end has taken off."

Triangle first experienced digital three-and-a-half years ago with a desktop unit. “Within six months, we knew that digital was more cost-effective than flexographic. A year later we started our search for a larger press. Our team members made a unanimous decision for Screen,” he said. “We’ve never looked back.”

Hagedorn adds, “There have been no major service or quality issues either. We’re very happy with the L350.”