Toppan Printing, a global leader in communication, packaging, décor materials, and electronics solutions, has developed the world’s first system enabling a moiré pattern to be generated for any image.

The system was developed by applying Toppan’s technology for reducing the occurrence of moiré patterns in printed media. An image is separated into two patterns to produce a moiré pattern design, enabling 3D and dynamic effects, a sense of depth, and variations in color density, which can be effective for in-store POP promotional tools, warning signs, and other displays.

Moiré patterns can occur unintentionally in printing due to the overlapping of aligned dots and lines. These interference patterns generally have a negative impact on the appearance and quality of printed media. Toppan, however, has applied the expertise cultivated in research into technologies to prevent such patterns to now be able to control and use them effectively for eye-catching designs and visual impact. The system developed separates an image into two patterns with different pitches and phases. The two images are then printed, and various methods, such as inserting a clear panel or leaving a space between them, are used to create the moiré pattern design.

“This new method of controlling and creating moiré patterns offers visual impact through a simple process,” said Luis Murillo, development manager at Toppan’s Technical Research Institute. “There is no need to use something like a lenticular lens, so it reduces the time and cost of producing something eye-catching that requires no power and gets people's attention in shops for promotion or in the street for warning signs. It is an excellent example of how research into preventing something can actually be useful in learning to control and take advantage of it. We will now focus on enhancing visibility, enabling full color designs, and improving the system’s processing speed.” 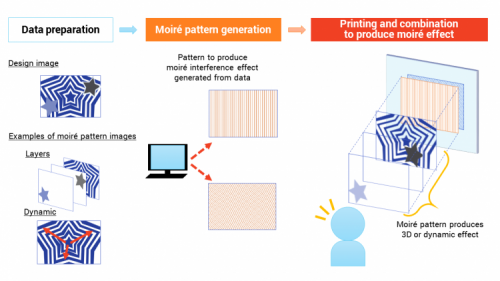