PHILADELPHIA — January 3, 2017 — The year 2016 proved to be a tumultuous one for the printing industry, just like it was for our country overall. The chasm between printing industry "haves" and the "have nots" grew wider, largely due to sales/profit leaders remaining fixated on obtaining system-wide workflow efficiencies through continued investments, focusing on profitable target markets and expanding their value-added services beyond commodity print production. By comparison, industry laggards, for the most part, failed to reinvest in their businesses to increase productivity and output capabilities, including digital printing and profitable related services such as mailing, fulfillment, creative services, online storefronts and 1:1 cross-media marketing communications. 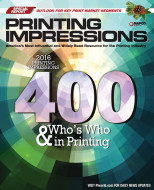 Print buyers, marketers, brand managers, industry suppliers, fellow printers, and those within the analyst and private equity communities, turned to our 33rd annual Printing Impressions 400 ranking of the Top 400 printers in the United States and Canada to gauge and validate the overall sales and market segment leaders. As a result, it's no surprise that our newest and previous rankings proved to be the No. 1 most viewed editorial assets residing on our PIworld.com website. Providing a wealth of pertinent information on each company, the rankings can be accessed by clicking on the following links: 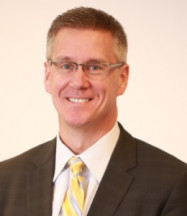 #2 Top Online Post: RR Donnelley's Breakup
As indicated on our last Printing Impressions 400 list, analysis on the October 2016 breakup of $11.7 billion industry conglomerate RR Donnelley into three separate, publicly held companies was the No. 2 most-read post last year. Never able to gain respect on Wall Street from a company valuation standpoint, RR Donnelley and its advisors elected to "maximize shareholder value" by creating more focused companies where, in theory, the parts are more valuable than the hole. Check out the post below for our analysis of what drove the breakup of the largest printing company, how it will impact the new enterprises themselves, and what it says about future growth and M&A trends for remaining industry behemoths like Quad/Graphics, Cenveo, Taylor Corp., Transcontinental and others. 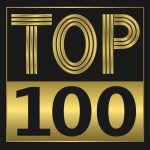 Not surprisingly, our first-ever ranking of the Printing Impressions Print Buyer 100 ranking of the Top 100 print buyers ranked by print demand came in at No. 3. The largest five demanders are at the pinnacle with more than $5.5 billion, or nearly 3% of all print. Each is over a billion dollars, and all are decentralized, making it easier for regional printers to do business with them. If you haven't already analyzed who these companies are, it's not too late. Click on the link below to help you locate some "big fish" that you may be able to catch in the new year.

Click here to read: A Look at the Top 100 Print Buyers Ranking Based on Amount Purchased Annually 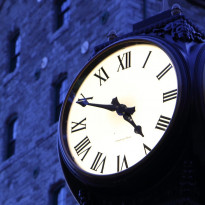 #4 Top Online Post: Overtime Pay Rules Blocked by Judge at the 11th Hour
The printing industry and business employers in general dodged a bullet when a federal district judge blocked new Fair Labor Standards Act (FLSA) overtime rules that had been set to go into effect Dec. 1st, 2016. In reporting on this important development, Printing Impressions also reached out to Adriane Harrison, human relations specialist at the Printing Industries of America, to get more insight on what the court decision means for the printing industry specifically, what’s the likelihood that it will become law in the future and how employers in the graphic arts should proceed. To get the latest insight on these potentially devastating overtime pay regulations, check out what turned out to be our No. 4 most read post by clicking on this link: 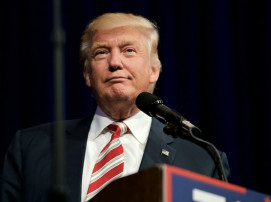 And, finally, in describing 2016 as a tumultuous year, it's fair game to say that it was a very divisive one for our country, too. So, it's no surprise that the "morning after" election coverage of President-elect Donald Trump rounded out our Top 5 most-read posts for 2016. More importantly, the article analyzed what implications Trump's victory will have on the printing industry, ranging from small business tax rates and capital equipment expenditure expensing, to government oversight and regulation, and healthcare and postal reform.

Click here to read: The Morning After: What Trump Win Means for the Printing Industry

If you think 2016 was a seminal year for our nation and industry, it's a safe bet to pronounce that 2017 will be an even wilder ride.