With 500 Press Installs, Tony Langley Reaffirms His Commitment to Manroland 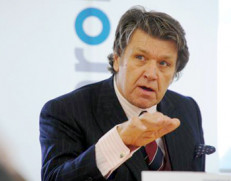 Tony Langley, the British industrialist who rescued the sheetfed press division of insolvent Manroland AG five years ago this month, re-affirmed his commitment to the German press builder in a recent keynote speech in Offenbach.

Addressing the company's German management and MD's of more than 40 subsidiary companies, Langley reflected on just how much the company had changed in five years.

He said that Manroland Sheetfed had been "...transformed by eliminating over capacity and inefficiency" and had "installed 500 presses and maintained several thousand more" since he took over.

Rounding on the company's nay-sayers, "...they said the company would no longer invest in research and development — well they may wish because while they have been wishing, we have developed the most technologically advanced printing press in the world today [the Roland 700 Evolution] and we have done it in just two years. Others would still be thinking about it after two years."

Langley added that not only had the company been profitable in each of the last five years — something none of the company's competitors could claim — but that it had now more than returned the group's initial investment.

Acknowledging the contributions of Alfred Rothlaender, (instrumental in the turnaround of Langley's Claudius Peters and Piller divisions in Germany) and current CEO, Rafael Penuela, he said that "management and employees had embraced the challenge to change their business for good."

Summing up, Langley drew parallels with President John F Kennedy's famous "Berlin speech" saying that five years ago he had stood by Manroland in a time of deep uncertainty and that five years later, he was proud to reaffirm: "Ich bin ein Rolander" (I am a Rolander)