Tom O'Brien of AccuLink: Printing Impressions 2019 Innovator of the Year 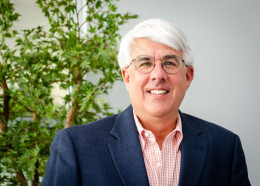 Tom O’Brien, chosen as our Printing Impressions 2019 Innovator of the Year, has a long track record of success that any printer would be proud to look back upon in retirement — if only he could get there.

But he says that decision is at least 10 years off because there’s simply too much going on at the moment at AccuLink, a onetime commercial printing company he has reinvented more than once. After starting the business as a copy shop and spending years printing for the trade and the federal government, O’Brien found a lucrative niche in dye-sublimation printing for photo cards and gifts. He now has his sights set on short-run flexible packaging, and he says he still hasn’t run out of ideas.

It’s no surprise that “convergence” is the box that O’Brien ticks when asked to identify the category of innovation that AccuLink exemplifies. Besides the dye-sub business and other printing and finishing for its trade customers, the company runs a fulfillment operation that delivers high volumes of personalized products daily, with extremely high on-time performance (99.5%) and a vanishingly low error rate (fewer than seven defects per million orders). 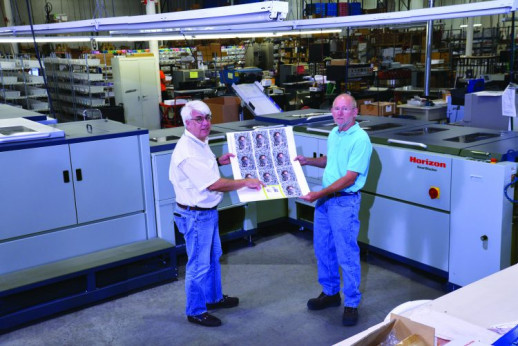 At AccuLink, founder Tom O’Brien (left) and VP of Manufacturing Wayne Renn use a Horizon SmartStacker from Standard Finishing Systems to make quick work of cutting and trimming various kinds of printed output.

“We have engineered and built our own lights-out, automated workflow to support our fulfillment business,” O’Brien explains. “The system takes in thousands of orders per day that must be produced, packaged, and shipped to the appropriate customer. All orders are personalized products.”

“I like doing fulfillment for other people,” adds O’Brien, who has a degree in accounting. “We’re very process oriented. We like process — we’re really quite good at it.”

AccuLink’s longtime partner for finishing is Standard Finishing Systems (Standard Horizon). “We’ve got virtually everything Standard makes in here,” says O’Brien, singling out the manufacturer’s SmartStacker B2 automated cutter/trimmer for particular praise. He says that the device, which reads barcodes to set itself up from job-to-job, is what enables the shop to turn out six-figure quantities of personalized cards every day.

The venture into flexible packaging will take place with the installation of an HP Indigo 20000 packaging press that O’Brien expects to have up and running in a new space in the plant next March. Viewing the recyclable standup pouches that the press and its finishing equipment will produce as “the democratization of packaging,” he thinks the investment eventually could become one of AccuLink’s largest sources of revenue.

The company’s diversification stems both from advance planning and from response to immediate circumstances. O’Brien says that initially, as a copy shop, “we were digital before there was digital,” by virtue of investing in technologies that others either didn’t know about or couldn’t afford. Sales climbed to better than $10 million, he recalls, after AccuLink installed its first Indigo press in 2003.

Then came the recession of 2007-2009, and like many other printing businesses, AccuLink had a hard time bouncing back from the downturn and the damage it inflicted on sales. The question then, according to O’Brien, was “how to become relevant again” with new products and services to re-anchor a future for the business.

The company’s fortunes began to turn around in 2015 when it landed an assignment to print and ship personalized cards and gifts in a six-week period during the holidays. Because the quantities were as variable as the content, and because taking the job would require AccuLink to build an integrated order entry and processing system hand-in-hand with the customer’s IT staff, the project was one that O’Brien wasn’t entirely certain he had the capability to fulfill.

“Sometimes innovation comes from desperation,” he comments. Deciding that candor would be the best course, O’Brien told the client that the proposition was “scary” because of its requirements and complexity. The customer agreed and rewarded O’Brien for his honesty by giving him the contract on a trial basis. Everyone else vying for the job, the customer confided, had promised it would be easy.

The trial went well, and O’Brien says that by the time the final pieces were shipped, it was clear that “we had knocked it out of the park.” This was the start of an expanding relationship that continues to be a profitable one for AccuLink. 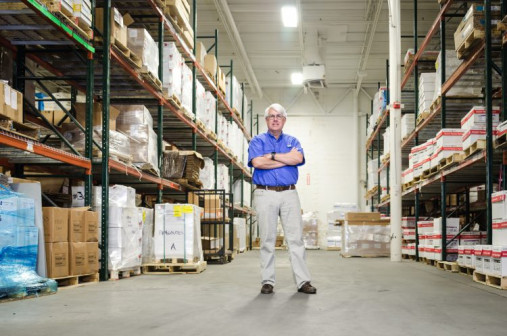 AccuLink Owner Tom O'Brien says that consistently excellent performance is the touchstone for what he defines as innovation.

Next, at the request of another client, came dye-sublimation, a process with which the company had no prior experience. It now provides about one-third of AccuLink’s revenue in the form of short-run, quick-turnaround orders for drinkware, apparel, travel bags, and other promotional items that lend themselves to decoration by dye-sub heat transfer.

“I feel like I was reborn in 2016” with the addition of the process, O’Brien admits. This year, in support of the business, he spent two weeks in China visiting manufacturers of sublimable items he intends to import directly.

In all of these ventures, consistently excellent performance has been the touchstone for what O’Brien defines as innovation. To accomplish it in the printing business as it presently exists, he advises, “you have to be perfect thousands of times every day.”