In 2018, the leadership team at the family-owned business Meyers began to lay the groundwork for a future succession of the third generation of the Dillon family. Last year, the late company founder Gerry Dillon’s grandsons took the reins at the company, with Chris Dillon, Jr. moving into the role of Chief Executive Officer and Michael Dillon being named Chief Revenue Officer. They entered their new leadership roles with a goal of restructuring the business around sustainable packaging with modernized revenue generation processes. They then purchased controlling interest of the company early this year, furthering the transition to the third generation. 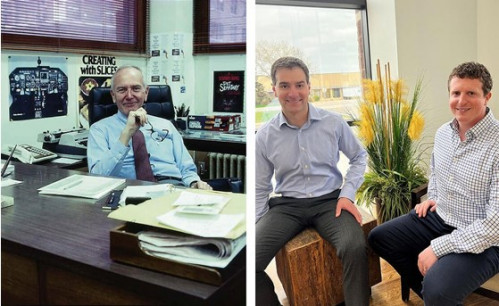 “We’re very fortunate to be able to continue running Meyers as a family-owned business, which we believe is in the best interest of our team and our clients alike. I’m proud to be able to lead this process as our CEO and I’m very excited by the opportunities ahead,” said Chris Dillon. He continued, “One of the great pieces of advice I’ve gotten from our former CEOs, both David Dillon and Mike Lane, is to surround myself with the most talented people. The fact that we’re a family business has been instrumental in making that happen and I think we’ll continue being able to leverage that to our advantage.”

Founder Gerry Dillon's three sons worked in the business starting in the 1960s, '70s and '80s, eventually working into leadership roles. In the early 1990s, David Dillon was named Chief Executive Officer. He and Chris Sr. continued in day-to-day leadership roles in the company and served on the board of directors. In 2018 Micheal Lane was hired as the first non-family CEO. This new leadership marked the beginning of an interim period when the company would begin preparing for an ownership transition to the 3rd generation of the Dillon Family. David and Chris Sr. then retired from their day-to-day roles but continued leading Meyers’ Board of Directors. David is now the Executive Chairman, and Chris Sr. is a board member.

Meyers was founded in 1949 as a small print shop in Minneapolis that produced sheet-fed printed materials, eventually expanding into flexographic printing in the 1960s and continuing to grow its lithographic and flexographic businesses. A major expansion in 1990 allowed the company to grow from serving primarily local clients to serving a roster of nationally and globally recognized brands. This expansion also created new opportunities for the business to design custom packaging and retail displays, print specialty labels, research and develop conductive ink solutions and more. Today Meyers counts many Fortune 500 and other leading global businesses as longtime clients, including Hormel, Frito-Lay, Estée Lauder, Ulta Beauty, Saucony, Levi’s, Microsoft, and Target, creating innovative visual packaging, labels and displays that showcase the clients’ products at locations throughout the world.

“Our vision for Meyers is centered around sustainable packaging that enables brands to continue increasing their contribution to a circular economy. Circular economies will help mitigate two of the largest environmental challenges today – the plastic waste crisis and habitat destruction,” said Michael Dillon. “In this way, we see very significant opportunities for sustainable packaging to build a better future. Capturing that opportunity is going to require us to be agile and to think differently from the rest of our industry, which are skills I’m lucky to have developed in the world of tech startups.”

Recipient of numerous industry honors throughout the years, Meyers has been awarded G7 Master Qualification by Idealliance for 11 consecutive years, the Sodexo Strategic Partner of the Year Award, and for the past 20 years has received the Hormel Spirit of Excellence Award. The company is also recognized as an industry leader through its commitment to environmental compliance and in March 2022 was one of 300 global businesses to sign The Climate Pledge. In April 2022 Meyers stepped up its deep commitment to sustainability by moving forward with a pledge to being carbon neutral within its operations by 2024. Meyers proudly supports the Sustainable Green Printing Partnership, the Forest Stewardship Council, and the Sustainable Forestry Initiative, and in late 2021 reached its goal of powering 100 percent of its operations using carbon-free electricity sources.

About Chris Dillion: Chris is an accomplished print industry veteran with nearly 20 years of experience covering nearly every area of print manufacturing. Chris began his tenure with Meyers as a high school student, working part-time in the Hand Bindery. He continued with the company in various roles while attending college and joined the family business as a full-time employee upon graduation from the University of Minnesota in 2005. Chris has served as a Project Manager, Sales Executive, Client Services Manager, Vice President of Operations, President and, in January of 2022, was named Chief Executive Officer for Meyers.

About Michael Dillon: Michael is a futurist, technologist, and self-proclaimed sustainability nerd who specializes in creating scalable revenue growth engines. He spent the first 11 years of his career at tech startups. Each of those startups worked to create a better future by addressing societal challenges ranging from increasing healthcare costs to the proliferation of counterfeit medicines. Before joining Meyers, Michael co-founded Vugo, which aims to create free transportation by leveraging a novel revenue-generating mobility media platform. Michael was tapped to revamp Meyers’ marketing department in the spring of 2020, then named as Chief Revenue Officer in January of 2022.

END_OF_DOCUMENT_TOKEN_TO_BE_REPLACED
Happening Today
The Powerful Case for US Book Manufacturing