drupa 2016 Preview: The Wait Is Almost Over 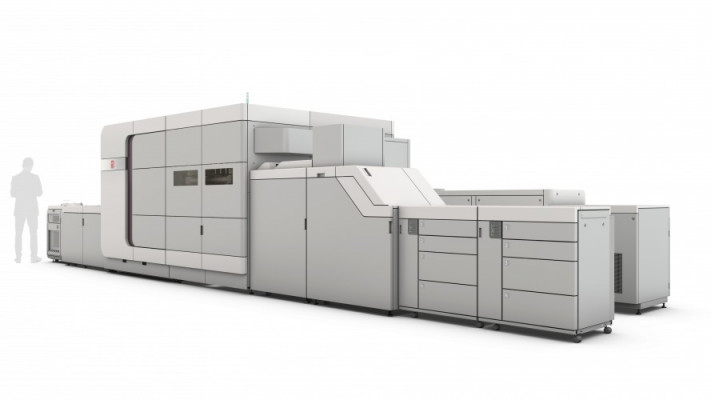 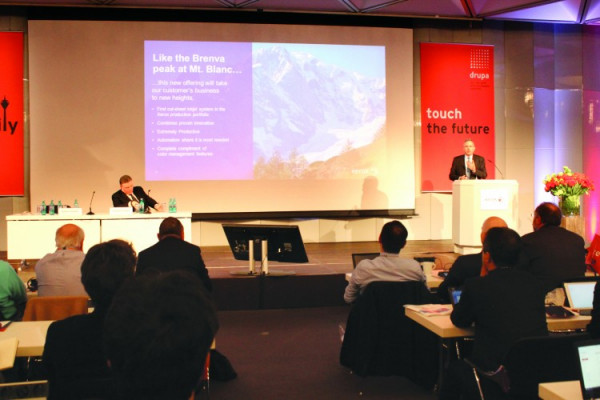 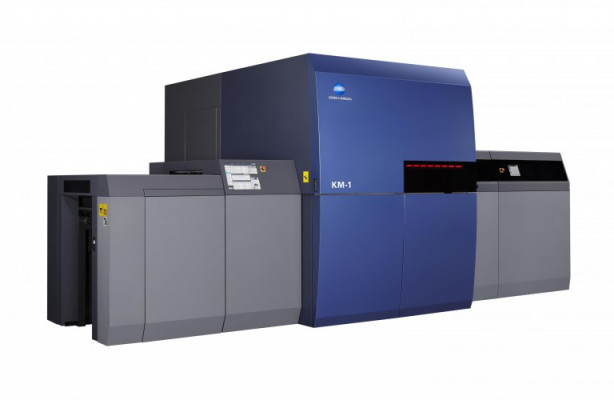 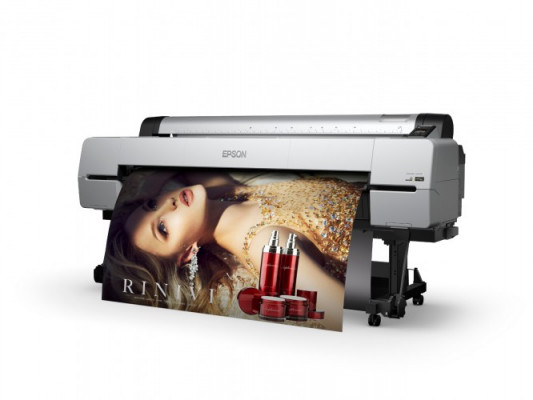 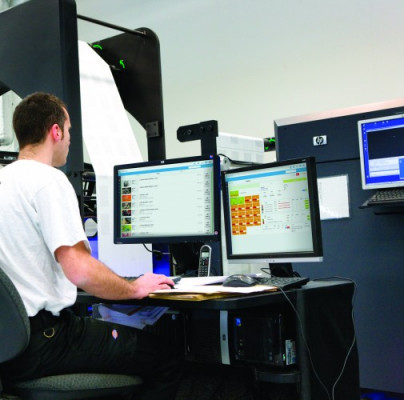 Perhaps the most surreal moment at the recent pre-drupa 2016 International Media Conference came not an hour into the event, when two musicians took to the stage to perform a live rendition of the drupa 2016 theme song, “drupa is in Town Again.” As the singer flailed her arms and strutted down the center aisle as if the room were filled with screaming concert fans, the 100 or so international graphic arts journalists in the room dutifully snapped pictures of the spectacle, glancing somewhat awkwardly at one another as if to ask, “is this really happening?”

Yes, drupa is in town again, that town being Düsseldorf, Germany, where the world’s largest printing industry trade show is set to run from May 31 to June 10. This city on the Rhine River has been hosting drupa since 1951 — at first every five years, then every four, and after this year, every three. Its usual two-week span will be shortened this year to 11 days. Its scope, however, is as broad as ever, with 1,650 exhibitors from 50 countries set to fill all 19 halls with their wares.

And in case you’re still stuck on the concept that drupa has an actual theme song, you should know that every drupa since 2000 has had one; attendees get to hear it at the end of each day of the show. (Fun fact: the first drupa theme song in 1986 was nominated as one of the worst corporate anthems ever.)

By all accounts, the mega trend at drupa this year will be the concept of “Print 4.0,” the end-to-end digital workflow enabled by the networking of machines and systems. This was noted several times by speakers at the pre-drupa International Media Conference. During the three-day event, which took place on the drupa site in Düsseldorf, 15 graphic arts vendors took turns announcing new products and dropping hints about what they will reveal
at the show.

In opening the pre-drupa International Media Conference, Claus Bolza-Schünemann, chairman of the drupa committee and chief executive of Koenig & Bauer AG, noted that exhibitors will be showcasing the intelligent networking of machines and systems at drupa 2016. 3D printing will also be an area of strong focus, he said, with live demonstrations all over the event. Packaging production, functional printing (such as printed electronics) and textile printing will be other drupa highlights. Based on the announcements that followed, though, production inkjet will be the talk of drupa 2016.

The first company to take the stage at the conference was Kodak, and it did not disappoint. The company revealed a long list of new products it will unveil at drupa.

The most significant announcement was of Kodak’s next-
generation inkjet technology platform, Kodak UltraStream, with smaller drop sizes and precise placement accuracy. The writing system includes a modular printhead that can be implemented in varying widths ranging from 8˝ up to 97˝. UltraStream will enable high-resolution printing at 600x1,800 dpi at speeds up to 500 fpm.  (Editor’s note: Kodak announced shortly after the pre-drupa event that it is in talks with prospective buyers to sell its Kodak Prosper enterprise inkjet business, which includes its Prosper Press platform, Prosper S Series imprinting systems and related products.)

Also launching at drupa will be the new Kodak NexPress ZX3900 digital production color press, an enhanced version of the Kodak NexPress SX platform, which supports thicker paper and the use of synthetic substrates and features a new multi-bit LED writing system.

Kodak will also preview a new Kodak NexPress platform, with commercial availability targeted for 2017. The new platform will feature a new multi-bit LED writing system and switchable color stations that allow for colors to be printed in different sequences and combinations. Kodak will also launch an Opaque White Dry Ink for NexPress presses for the Fifth Imaging Unit.

“I think this will be the most exciting drupa ever,” began Ricoh’s Peter Williams as he announced some of what Ricoh has in store for drupa 2016. The company will be demonstrating a fully configured Ricoh Pro VC60000 running a variety of media roll-to-roll and roll-to-sheet. The enhanced inkjet press will feature a 25% speed increase.

Though its presentation came at the end of a long day, Xerox woke the room with its announcement of a new cut-sheet production inkjet press, the Brenva HD, named after a mountain in Italy. Able to print 194 A4 images/min., the press incorporates paper-path components of the Xerox iGen, the stacker from the Xerox Nuvera and the inkjet marking module from the Impika. It boasts an in-line spectrophotometer to assist with calibration and profiling; object-oriented color management to distinguish text, graphics and images; and K-only mode so it will run as a cost-
effective monochrome press. The Xerox Brenva HD will be available in North America in September 2016.

Paper, Finishing Enhancements for i300

Front and center in the Canon booth at drupa will be the Océ VarioPrint i300 cut-sheet inkjet press, with some new features to bring it even more attention. The new ColorGrip in-line paper conditioning option will greatly increase the number of substrates the press can print on, to include standard uncoated and offset coated media. Canon will also introduce an enhanced ink set for the VarioPrint i300.

Two new finishing options will be added to the VarioPrint i300 to support booklet-making and perforating. The BLM600 booklet-making system combines stitching, folding, spine forming and trimming in a single machine to produce square-back booklets up to 224 pages thick. Also new will be the Tecnau TC1530 dynamic cut-sheet perforator. This device dynamically creates horizontal and vertical micro-perforations, allowing the perforation pattern to be turned on and off on a page-by-page basis.

In addition, Canon will show the new imagePRESS C8000VP production press. Running at 80 ppm, it has a recommended monthly volume of 80,000 to 400,000 pages. Offering all the quality, color consistency and productivity benefits delivered by the C10000VP, the C8000VP also runs a wide range of media — from 60 gsm (uncoated) up to 350 gsm — and delivers high-quality output even on long-run or mixed media jobs, including specialty stocks such as vellum, film and synthetics.

Konica Minolta will use drupa to launch the KM-1 UV sheetfed digital inkjet press. While the company offered few new details on the press, past releases boast of its 1,200x1,200-dpi resolution, 23x29.5˝ media size and print speeds of up to 3,000 sph.

At the event, Konica Minolta named PLS Print Logistic Services Germany in Markkleeberg as the first European beta site customer for the KM-1 UV digital press. The operation, which is a European subsidiary of U.S.-based online printer OvernightPrints, notes that using UV inks enables it to move work quickly and easily to finishing with offset quality on standard offset stock without having to pre-coat or use a digital stock.

Similarly, Fujifilm announced that its two main innovations at drupa would focus on resource savings and inkjet technology. Its J Press 720S will take center stage, and the company announced several enhancements: Press up-time has been improved by 20%, thanks to software upgrades that have bolstered the efficiency and job handling capability of the press; the ability of the J Press 720S to print on canvas media has now been approved, widening the application capability of the press even further; Fujifilm’s XMF Workflow has been improved to more effectively communicate with online order and MIS and more efficiently manage the J Press 720S alongside existing offset presses.

Though Epson previously announced the PaperLab office paper recycling machine, when COO Sunao Murata introduced it in Düsseldorf, everyone in the room took notice. Using no water, the system securely shreds waste paper, then turns it into new paper at a rate of 14 A4 sheets/min., or 6,720 sheets in an eight-hour shift. A video animation showed the three separate processes PaperLab uses: fiberizing, binding and forming. It removes both toner and inkjet ink.

Murata said it was designed for use in government offices, financial institutions and other enterprises that use large volumes of paper. Users can produce a variety of types of paper, from A4 and A3 office paper of various thicknesses to paper for business cards. The PaperLab will even produce colored and scented paper.

Epson also announced it will show 13 new wide-format printers at drupa, such as the SureColor SC-S series of 64˝ signage printers, which use Epson’s new formulation UltraChrome GS3 inkset and boast significantly lower ink consumption — said to be up to 50% less ink consumption than latex technology.

Bringing Clarity to Print and Mail

Pitney Bowes announced a new SaaS-based product designed to bring the power of the industrial Internet to the production mail industry. The Clarity solutions suite will integrate and organize data collected from sensors on production mail machines to support real-time insight, predictive analytics and prescriptive maintenance. The insights derived from Clarity can identify strengths and weaknesses in users’ print and mail operations, and allow Pitney Bowes to recommend solutions to improve both productivity and capability.

Coming so soon after EFI Connect in Las Vegas, there was not much new pre-drupa news for EFI CEO Guy Gecht to report on (though the timing was perfect for him to announce EFI’s acquisition of Rialco Ltd., a supplier of dye powders and color products for digital printing and industrial manufacturing).

Gecht said the biggest announcement from EFI at drupa would be a new platform combining Cretaprint technology for ceramic tiles, the Jetrion label printing technology and VUTEk wide-format technology to create a system for packaging.

At drupa, EFI will also expand its Productivity Suite with the new Publication Suite, Corrugated Suite and Midmarket Suite for Superwide-format.

The Hardcover Bookline BF 513 will make all the zero-makeready features of the flagship BF 530 Bookjet-Edition available for a lower budget, 30 books/min. class. Also, the new KM 610 perfect binder can run between 5,000-9,000 books/hr.

Though the pre-drupa 2016 International Media Conference was packed with drupa product announcements, there are many more to come. Another pre-drupa press conference took place in Bruges, Belgium, featuring announcements from Agfa, Xeikon and others. (Coverage on that press event is included in a companion feature that appears on page 38 in this issue.)

Of course, coverage focused on product releases from the sponsors of these two pre-drupa media events comprise just a snapshot of the wide range of industry technologies that will be making their drupa debuts.

Stay tuned for more comprehensive post-drupa coverage that will appear in the July issue of Printing Impressions. PI