MARLTON, N.J. — June 2, 2016 — The MBO Group, the worldwide finishing and folding leader, is showing 12 different finishing lines — including the new LeMans and Monza Signature Production Systems; the K8-RS Digi-Folder, the world's fastest folder and latest module for digital web finishing; and new delivery systems  — at drupa 2016. The pioneer of modular systems not only offers the latest, most flexible and reliable equipment — each compatible in countless configurations — it is also presenting its exclusive, Customer Advantage Program (CAP). CAP formalizes the company's proven, full-scale production assessment and set of recommendations that substantially optimize postpress configurations for digital, offset, and specialty workflows.

The CAP Program: Honoring the Customer Experience
Focus on the customer and the customer experience is central to MBO culture. Accordingly, the MBO Group not only pioneered modular finishing in 2012, it was one of the first postpress manufacturers willing to customize solutions for end-customers as well as partners.

To make it easier for customers to understand MBO's approach, the company has formalized its three-part assessment and recommendation approach as CAP, for Customer Advantage Program.

The three unique advantages in the CAP program are:

The MBO Group got in front of the challenge by working with OEM press suppliers and printers, to insure that new digital equipment could fit into offset, hybrid, and digital shops with the least upheaval.

The company soon built a development infrastructure that could accommodate the need for specialized systems, and not long after attained the ability to customize any configuration — even for individual sites — in a cost-effective manner.

New: The Fastest Folder is Now Modular
Postpress operations can now add the world's fastest folder to any production line - whether digital or offset - with the next generation K8-RS Digi-Folder. The MBO Group pioneered the highly cost-effective, modular approach that gives printers the ability to mix-and-match postpress equipment. 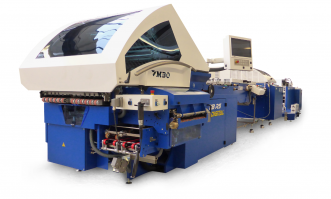 The High-Speed Web Book, Magazine and Catalog Finishing System line, featuring the K8-RS Digi-Folder module from MBO will be running live at drupa 2016. This particular adaptation of the K8-RS platform is specifically engineered for digital book block production and/or analog signature production.

The highly flexible Stamina line — a folding carton system with an integrated rotary diecutter is running live at the MBO stand. By combining the rotary diecutting and folder-gluer processes, printers gain the ability to produce "nickless" folding cartons in one pass, eliminating the need for additional production steps like refining. The combination also eliminates transfers and staging between the diecutting and folder-gluer processes because this occurs in-line, giving printers a streamlined folding-carton process.

The Stamina line also features an integrated camera system that can match pre-printed inserts to the folding carton job, greatly improves job integrity as it practically eliminates the possibility of accidental job mixing.

New Delivery Systems
A postpress system can only run as fast as the operator is able to handle the finished product, making delivery system technology critical to the postpress process. This is why the MBO Group has developed three new delivery systems, which are engineered to make the operator's job easier.

These stacking delivery systems from MBO feature a wide range of postpress technology including automatic format recognition, automated sheet ejection, and an ergonomically designed delivery table for easy access and product handling. Thanks to MBO's modular approach to postpress, each of these deliveries is compatible with many different MBO modules.

New delivery systems being unveiled at drupa 2016 include:

A700 Automated Stacker — Configured at drupa in-line with the M80 Flexible Folding System, the A700 Delivery is a highly versatile delivery system ideal for signatures, direct mail, and any number of commercial postpress applications.

A7-Digital Signature Stacking Delivery — The A7-Digital Signature Stacking Delivery is designed specifically for the digital postpress market, and is ideal for book block or signature applications. By spot gluing along the spine, the A7-Digital delivers glued book blocks that maintain integrity when being handled in subsequent processes. drupa attendees will be able to see the A7-Digital delivery in-line with the K8-RS Digi-Folder Book, Magazine, and Catalog Web Finishing System.

LeMans and Monza: High Speed Signature Processing
The MBO Group is proud to unveil two new high-speed signature production systems: LeMans and Monza. Both systems are for printers running high-volume signature applications. The all new A10 Log Stacker is paired with these machines to allow operators the ability to run at higher speeds by building banded signature bundles at the delivery stage - making it much easier for one operator to keep up with the production of a high-speed system.

LeMans — Developed from scratch, the LeMans Signature Processing System features the all new K10 Folder in-line with an A10 Log Stacking Delivery. The MBO LeMans system represents the pinnacle of industrialized signature folding production. It is for companies that run high volumes (more than 75 million). LeMans can fold signatures at speeds more than 20,000 sheets per hour, fully automated.

Monza — Developed off the K8-RS high-speed folder, the Monza Signature Processing System takes signature folding one-step farther than its predecessor by pairing the K8-RS technology with the A10 Log Stacking Delivery System.

...and More of MBO's Popular Finishing Systems in Action
More of the company's postpress technology will be on display during the show. This includes, but is not limited to: MBO M80 technology; MBO Buckle Folding Machines; MBO Combi Folding Machines like the new K70; and more.

About the MBO Group
Founded in 1965, MBO (Maschinenbau Oppenweiler Binder) offers a broad array of cutting edge, high-performance postpress solutions for conventional, digital, and hybrid print operations; and is the only supplier that covers all bindery areas including folding, mailing, and diecutting for both offset and digital environments. 500 employees are based throughout the world, at offices including headquarters in Oppenweiler, Germany; and Portugal, the United States, France and China. MBO acquired Herzog+Heymann in 1999.

MBO's history of pioneering new technology has served its customers, and their clients, for over 50 years. Life-long relationships are passed from generation on to generation. Year after year, the MBO Group delivers new products and technology that speed set-up and changeover through greater automation; reduced downtime and increased output and profits for customers.

The MBO Group's global headquarters, located in Oppenweiler, Germany, houses the research and development team responsible for the company's cutting-edge innovations. The extensive dealer and support/service network, minus that which is managed by the independent offices, is also managed out of Oppenweiler.