The Largest-Ever NFC Deployment in Wine and Spirits

According to Bill Cummings, senior VP of corporate communications for Thinfilm, part of the company’s mission is to evolve the “Internet of Things” into the “Internet of Everything.” Thinfilm, a manufacturer of near field communication (NFC) tags, just took a major step forward in this goal, producing the NFC tags used in the largest ever implementation of NFC in the wine and spirits industry.

Barbadillo, one of the top wineries in Spain, has incorporated Thinfilm’s SpeedTap NFC tags into approximately 126,000 bottles of its Castillo de San Diego, a white wine that Cummings says is the top selling white wine in Spain. Cummings explains that the traditional view of the Internet of Things refers to connecting electronic products that already have some degree of intelligence, such as thermostats and automobiles. But by incorporating NFC technology into non-powered, everyday products like wine bottles, he says the Internet of Things will become more accessible to both brands and consumers.

“What Thinfilm is doing through printing and roll to roll manufacturing, is producing little bits of intelligence at ultra scale,” he says. “We’re able to expand the traditional boundaries of the Internet of Things.”

The incorporation of NFC tags into Castillo de San Diego is part of a summer-long campaign from Barbadillo called Dando en el Blanco, which Cummings explains loosely translates to “Hitting the Target.” The SpeedTap NFC tags’ role in the campaign is to provide consumers with the opportunity to tap their NFC enabled smartphones on one of the 126,000 bottles and enter their information for a chance to immediately win one of 12 €1,000 prizes. This is the second time Barbadillo has incorporated Thinfilm’s NFC technology into its products, having used the company’s OpenSense tags a year ago as a way to authenticate rare bottles of sherry. 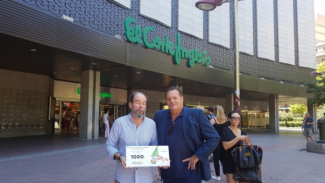 The first winner in the Dando en el Blanco campaign is presented with a €1,000 prize.

Cummings explains that to discreetly incorporate the tags into the bottle’s packaging, Thinfilm provided the tags directly to Barbadillo’s printing and converting partner as wet inlays, which he explains is a “sticker version” of the NFC tag. The converter was then able to apply the tags into the plies of a paperboard neck collar to be affixed onto the bottles.

Once the bottles hit the shelves, Cummings explains that the NFC connectivity was apparent to consumers through calls to action placed onto the neck collars, through in-store signage and through a concurrent advertising campaign.

“The NFC technology and the neck collars were part of a much broader campaign,” he says. “Several winners have been identified already.”

In addition to developing a new way to communicate with consumers, Álvaro Alés, Barbadillo’s marketing communications director, explains that the campaign has helped the wine producer collect valuable information about its consumer base.

“For a year now, Barbadillo has been focusing its digital marketing strategy to ‘inbound marketing,’ whose main objective is to reach Marketing Qualified Leads (MQL),” Alés wrote in an email to packagePRINTING. “Thanks to this campaign we are collecting valuable consumer data, such as which areas of Spain are responding more positively to the promotion or what are the moments when consumers prefer to participate in the dandoenelblanco.es competition.”

With the deployment already on track to being a success, Cummings says that brands in other markets are beginning to inquire more earnestly about using NFC technology. Specifically, he points out that conversations are being held with companies in the craft beer, medical device, pharmaceutical and specialty foods markets.

One of the major reasons some larger brands are asking about NFC, Cummings says, is due to a desire to better connect with the millennial generation. He explains that as younger consumers continue to seek out craft or artisanal brands — particularly in the spirits market — larger brands are looking into technology to communicate with this market segment.

“[Millennials] want to engage with the brand and are looking for an experience,” Cummings says. “They want to know about the brand, its sustainability initiatives and how a product was produced. Larger brands are looking to leverage technology to compete with smaller providers.”

While a substantial amount of NFC deployments in packaging have been launched in Europe, Cummings says there is reason for optimism surrounding the growth of NFC-enabled packaging in the United States. He explains that more than 50% of smartphones in the U.S. are iPhones, and Apple had only enabled NFC in iPhones to work with Apple Pay and other payment applications, and not with traditional NFC tags.

However, Cummings explains that with Apple’s announcement that iOS 11 will be released in the fall, the expectation is that the NFC capability of iPhones will be expanded beyond payment applications and will be able to read traditional NFC tags. With the majority of U.S. smartphone users unable to use NFC beyond payments, opening that door to Apple customers will certainly pique the curiosity of more North American brands to explore NFC.

“In the U.S. there’s a larger percentage of iPhone users — north of 50%,” Cummings says. “Depending on where you are in the world, there’s a larger penetration on the Android side … That’s one of the reasons why you see larger field trials of NFC in other locations.”

Alés explains that usage of NFC in Spain had also been largely relegated to payment applications. However, with this smart packaging deployment, he states that Spanish consumers are realizing the full NFC capability of their smartphones.

“To date, the Spanish consumer only associated NFC to contactless technology available for payments in credit cards,” he writes. “Thanks to this campaign they are discovering that NFC is also in their mobile phones.”

Cummings explains that once the Barbadillo campaign has concluded, Thinfilm will collaborate with the brand to compile a case study on the results.

“It’s really exciting for Thinfilm and our relationship with Barbadillo,” he says. “It’s the second project we’ve done and the technology and solutions validation is exciting to see.”

The Results Are In: NFC Packaging Boosts Sales for