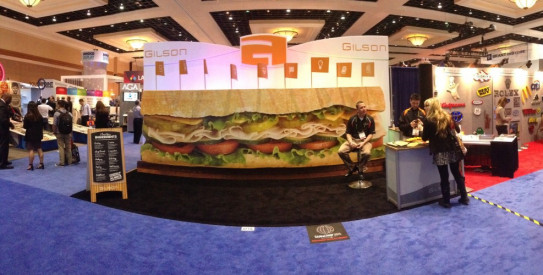 Background: Gilson Graphics works with hundreds of clients every year on the design, production and implementation of integrated campaigns, according to Kim Elmore, marketing manager. It has a formula to define the audience and a communication process that was created to maximize returns.

The objectives of the campaign were three-fold:

“What was interesting to us about this campaign was that the campaign success actually grew at the trade show,” Elmore says. “Contacts who were classified as ‘non-responders’ from the initial campaign actually came to the booth specifically referencing the invite; some actually came carrying the printed invite with them.”

Structure and Components: The campaign theme was based on a “lunch and learn” event held previously that included sandwich-themed imagery and metaphoric messages about their marketing “ingredients.” This was incorporated into the new campaign, along with casino chips that were used at a previous GlobalShop event. The campaign was broken into two segments: phase one was the pre-show marketing campaign, with phase two featuring an at-show promotion.

In phase one, the direct mail campaign included print and digital components. Pieces were printed to look like sandwiches with variable customer data and personalized URLs (PURLs) for event registration (concealed by a Z fold). The piece encouraged attendees to visit their PURL and request either casino chips or snack chips (depending upon show attendance) along with a customized marketing kit. The pieces were spot UV coated, diecut, hand folded and inserted into #10 envelopes.

A second mailing 10 days later reinforced the original message with some of the same components — variable data printing, spot UV, diecutting and hand folding. But the second pass was sent in a 6x9˝ clear envelope. Gilson’s in-house Web services team developed the personalized microsite with an online form to request a casino chip at the event. Non-attendees received the marketing kit with a bag of snack chips instead. Show attendees were prompted to request a meeting with a Gilson representative, at which time they would receive a bonus of “double the chips.” An automated email went to both the customer and a Gilson rep to ensure efficient communication.

Phase two saw Gilson’s large-format group construct a 19-foot-wide, 6-foot-high sandwich that reinforced the look and feel of the pre-show campaign. The display included a sandwich sign and simulated wooden tabletop. Gilson teamed up with Exhibit Design Consultants to make the sandwich concept a reality.

The booth was primarily constructed from Falconboard, Coroplast, Sintra and Ultraboard, demonstrating Gilson’s ability to create signage and POP displays out of a variety of substrates — a key point of interest for many retailers.

Gilson’s sales team encouraged booth attendees to engage with the various display elements and request their casino chips, which required a badge scan to provide contact information for sales follow-ups. Pre-show registers were noted in the lead retrieval survey.

At show’s end, the disposable booth graphics were donated to a local educational non-profit, eliminating the cost of shipping the one-time-use graphics back to Gilson’s headquarters in Grand Rapids, Michigan.

Results: Gilson Graphics reaped a 137 percent increase in unique company leads. Other statistics to emerge from the campaign:

“Since this campaign, we’ve implemented similar multi-touch strategies for other events and the results have been equally impressive,” Elmore notes. “For example, we used a similar strategy for a holiday campaign last year to drive new business inquiries and, out of 500 pieces mailed, we yielded an unprecedented 800 responses — yes, that’s right, a 160 percent return. The sales staff was over the moon.

“There is definitely a correlation between the increased emphasis Gilson has placed on marketing efforts, and our year-over-year growth. That’s no easy feat in any business, let alone the printing industry.”