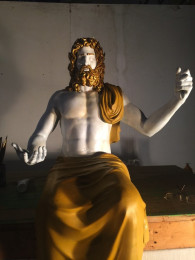 The 3D printed replica is being re-created for one of the first times in history — and made possible by the Stratasys Fortus 900mc Production 3D Printer.

MINNEAPOLIS and REHOVOT, Israel — August 5, 2016 — Stratasys Ltd. (Nasdaq:SSYS), the 3D printing and additive manufacturing solutions company, has announced the company is teaming with Atlanta’s Millennium Gate Museum to resurrect one of the rarest pieces of art in Ancient Greece — led by the true-to-life realism of 3D printing. Working alongside the 3DCenter at Kennesaw State University and backed by the power of a Stratasys Fortus 900mc Production 3D Printer, the team is unveiling a near-exact 3D printed replica of one of the “Seven Wonders of the Ancient World” — the Statue of Zeus at Olympia. This project represents one of the larger 3D printed classical works re-created via advanced Fused Deposition Modeling.

Imagined by sculptor Phidias in 432 B.C., the initial structure was designed on a wood frame with gold and ivory panels. Taking more than 12 years to construct, the ancient statue honored King of the Greek Gods, Zeus. It was destroyed in a fire during the 5th Century A.D., and artists and historians have struggled to recreate its presence for modern times. With a unique ability to maximize production-grade thermoplastics to create strong, dimensionally stable and accurate 3D printed parts, Stratasys Fused Deposition Modeling (FDM) 3D printing technology was the impetus to overcome these challenges. See the full re-creation of this treasured statue. 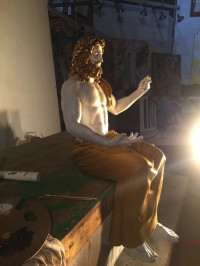 Phidias created the original sculpture of Zeus in 432 B.C.

“Artists around the world are being liberated by the full-fledged realism made possible by Stratasys 3D printing technology. Having the capacity to design and 3D print using highly durable materials with complex geometries and the highest levels of accuracy, museums can re-introduce some of history’s most treasured works,” said Sig Behrens, General Manager of Global Education, Stratasys. “Teaming with Stratasys, institutions are completely transforming education and learning — as students and museum visitors are now able to grasp the power of forgotten classic art. 3D printing is the very impetus sparking a highly realistic learning experience — ensuring these essential pieces of history are never again forgotten.”

Creating and Innovating with Industrial Strength, Durability and Scale
For massive recreations like the Statue of Zeus at Olympia, the Fortus 900mc Production 3D Printer ensures artists can build these large parts with an enhanced degree of speed and scale — up to 3x faster than traditional 3D processes. Offering maximum flexibility, creators can easily fine-tune performance and speed — achieving more realistic parts, generating complex designs and producing the smooth finish artwork requires. With the durability of production-grade thermoplastics, museum creators were guaranteed the resulting statue was highly stable to remain intact during the most challenging environments.

Re-Introducing the World to Classic Work
Additive manufacturing is making this rare statue available for the first time in several thousand years. Based on an initial image of the piece, designers translated the rendering into a CAD file using 3D modeling software. Actual production was achieved via an additive approach — laying successive material layers until the 3D print was complete. With the final replica standing at 6 ft. tall, the work is being unveiled in conjunction with the 20th anniversary of the Atlanta Centennial Olympic Games. 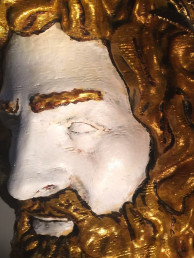 The Statue of Zeus at Olympia will be on display at Atlanta’s Millennium Gate Museum.

“Throughout history, there are always instances where the most precious works of art get destroyed or broken. In the past, this disappearance meant items were lost forever. That’s why we’re so heavily invested in the artistic value of 3D printing,” says Jeremy Kobus, director of The Gate Museum. “Committed to working at the intersection of technology and art, we see the tremendous potential of 3D printing for educational applications. Teaming with Stratasys and KSU’s 3DCenter, our hope is to deliver creations far too few have even tried to attempt.”

The Statue of Zeus at Olympia will be the centerpiece of the museum’s newest exhibit “The Games: Ancient Olympia to Atlanta to Rio”, opening August 20, 2016. The event features a range of Greek artifacts from The Hearst Castle Collection in San Simeon, Calif., and the Michael C. Carlos Museum in Atlanta. Underlying the exhibition will be an exploration of 3D printing as a recognized art form — and as an effective tool for the preservation of historical artifacts.

About Stratasys
For more than 25 years, Stratasys Ltd. (NASDAQ:SSYS) has been a defining force and dominant player in 3D printing and additive manufacturing — shaping the way things are made. Headquartered in Minneapolis, Minnesota and Rehovot, Israel, the company empowers customers across a broad range of vertical markets by enabling new paradigms for design and manufacturing. The company’s solutions provide customers with unmatched design freedom and manufacturing flexibility — reducing time-to-market and lowering development costs, while improving designs and communications.

Stratasys subsidiaries include MakerBot and SolidScape, and the Stratasys ecosystem includes 3D printers for prototyping and production; a wide range of 3D printing materials; parts on-demand via Stratasys Direct Manufacturing; strategic consulting and professional services; the GrabCAD platform with over 3 million professional users; and the Thingiverse and GrabCAD communities with over 2 million 3D printable files for free designs. With more than 2,700 employees and 800 granted or pending additive manufacturing patents, Stratasys has received more than 30 technology and leadership awards.