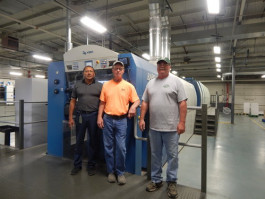 RIVER FALLS, Wis. — June 23, 2017 — It is rare to find a printhouse as business and customer-savvy as Southern Champion Tray (SCT) of Mansfield, Texas. The leading manufacturer of paperboard packaging, who prints for the likes of Papa John's and Sodexo, boasts 90 years of experience, and as a third-generation company has operated through depressions, wars and times of general prosperity.

According to SCT's production manager Robi Siklosi, the key to surviving and thriving during varied economic climates has been to follow a set of three guiding principles: maintain a clear vision, constantly innovate, and make an unwavering commitment to excellence and integrity. All three principles become apparent when speaking with Siklosi, who perfectly represents the caliber of people employed by SCT, and the efforts they put towards serving their customers.

In September 2016, Southern Champion Tray installed an LED-UV curing system from AMS Spectral UV - A Baldwin Technology Company on its KBA Rapida 106. According to Siklosi, the company had been keeping an eye on UV technologies for many years, and had learned about LED curing circa 2010 when they initially purchased the press. The decision to retrofit, he said, came when they felt the technology had evolved to a point where it was ready for their operation.

"Since 2010 we had been in close communication with AMS, and had attended the Print UV conference many times to learn more about LED printing. In our opinion, AMS was definitely the number-one vendor with the most experience in developing these systems."

The decision to invest in LED curing was based on a host of solid, factual benefits, according to Siklosi. "Energy savings was a big one, as was the fact the lamps last 20,000 hours instead of 2,000 like with conventional lamps. The elimination of powder from the pressroom, environmental friendliness and potential press speed were also factors."

The installation took two weeks: LED lamps were installed so they can be moved between units 1 to 2 and 6 to 7, while UV and IR driers are positioned in the delivery. "We had to give AMS the press for two shifts, and we stayed in production the rest of the time. AMS also provided us with a coach who made sure all staff were well trained before he left." 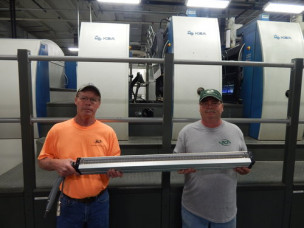 Press operators Keith Miller (left) and Pat Osier (right) show what the LED-UV curing module from AMS looks like when off the press. The module can last 20,000 hours, compared with 2,000 hours for a conventional UV lamp that uses mercury arc bulbs.

The printing veteran noted that the years SCT had spent researching LED were well spent, and he felt that there wasn't a huge learning curve when adding LED-UV technology to the press. "We have been blessed with many great vendors who were involved in the process every step of the way. Our coating vendor and fountain solution, roller wash, blanket and ink suppliers all worked with us and provided us with great information. We had to change everything for the switch from conventional printing to LED-UV, and without our vendors we would have been lost. AMS also played a great role in educating us."

Upon conversion, SCT staff felt that the move had been the right one. "Our pressmen love working with LED," Siklosi said. "They love the brilliance of the LED inks. They love that there are no more print scratches or offsetting. We really enjoy exploring all the specialty work, like printing on foil, and using specialty techniques."

"Our configuration works well with printing on MET PET using one or two bumps of white," Siklosi added. "Also, having the flexibility to move the LED between units 6 and 7 helps with strike-through coatings and motion coat."

Since adding LED-UV to its arsenal, SCT has been able to get into the specialty high-end packaging market, where, according to Siklosi, "specialty application like strike-through and motion coatings are a must." He also said the company now prints on foil board, a type of work they had to turn away in the past.

In terms of speed, the Rapida 106 can ramp up to 18,000 SPH with LED-UV curing in place. "The paperboard has an influence on the speed of the machine more than the LED-UV system does," he explained. "We haven't had any reason to slow the press down due to UV issues." 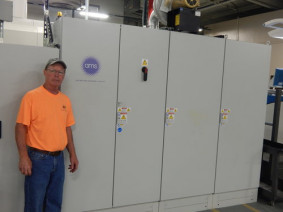 When it comes to turnaround times for customers, Siklosi reports that they have improved. "In the past we had to print our jobs and send them to an outside vendor for UV coating. We now turn these jobs around the same day if the customer requests a quick response - so all our UV print and coated jobs have greatly reduced turnaround times."

Siklosi's overall opinion of LED-UV curing is highly positive, and he feels printers should consider retrofitting if they want to improve their operations. "The install was very quick, the learning curve was short since we did our homework, and researched the configuration and what supplier to go with. And we can share our efforts to be eco-friendly with customers - the energy savings tell a great sustainability story."

Click here to watch a glimpse from the inside of Southern Champion Tray.