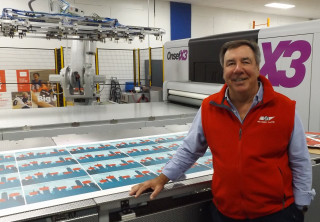 With a maximum throughput of nearly 10,000 sq. ft. per hour, the Onset X3 is ideal for companies such as Southern Carton producing fast-turnarounds. A choice of unidirectional, bi-directional and super high-quality print modes can be selected depending on the specific job requirements. Southern Carton’s Onset X3 features two channels of white ink, as well as a semi-automatic robotic handling system.

"We’re looking for more and more opportunities because the Onset X3 is so versatile," says Dave Kennedy, CEO, Southern Carton. "It's a great selling feature in that we can print white (ink) and our competitors cannot."

“We are printing on glass, and a lot of acrylic,” adds Eugene Peek, digital coordinator, Southern Carton. “With the speed and flexibility of the Onset X3, we are able to accept many new jobs and turn them around same day, or within 24 hours.”

Peek recently completed a job for a client that included printing large quantities onto a fiberboard type substrate, with profiles such as crosses, shadow boxes, and plaques. The job originally was riding an eight-week production timeline, and a vendor in China was involved. Unfortunately, the job was continually put on backorder. When the client turned to Southern Carton, Jim Henderson, general manager, and Peek stepped up. With the Onset X3, Southern Carton turned the job around in a week, and with much better quality. "The client is paying the same price for our output compared to its vendor in China, so it’s a win/win/win," said Peek.

The Onset X3's innovations are helping Southern Carton get to where it couldn't before. "With regard to our close proximity to Nashville, we’re trying to get involved within the country music industry," Kennedy says. "We’re also looking at wineries and craft breweries and distilleries. We are targeting potential clients who traditionally don’t want to order 1,000 of this and 2,000 of that; they want 50 of this and 100 of that. The Onset X3 is a game changer for us."

The Onset X3 also has helped Southern Carton grow from its regional base. "That has been a great selling feature for us," Kennedy said. "A client in San Francisco asks us to run a job that might typically be done 150 to 200 miles from its plant. With the high speed output from the Onset X3, we can ship to clients anywhere and everywhere."

Southern Carton recently completed a rush order consisting of 200 corrugated sheets printed within the same day. "Our customers have come to expect a very quick turn," Kennedy says. "It's now a precedent. That's the way we built our business. Our clients know what we can deliver on the box side, and they expect us to deliver on other output, too."