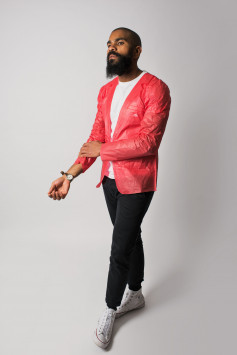 If you’re a fan of magazine-inserted scent strips, then we’ve got something that’s gonna blow your mind. If you’re one of those people that has to tear them out of magazines immediately due to impending nausea, read on if you’re a fan of kitschy promotions. If you’re neutral, well, everyone’s gotta take a stand on something someday, and magazine inserts are a relatively harmless place to start. With that longwinded intro out of the way, let’s take a deep dive into Old Spice’s latest high jinx.

Old Spice has come up with a brand new approach to scent strip technology in its new print ad for GQ. Actually it’s not a scent strip at all. Instead, Old Spice partnered with Wieden + Kennedy to create an insert that holds within a disposable, wearable, red paper blazer that also happens to be generously infused with one of the brand’s Red Collection “signature scents.” Whatever that means…

A statement given by a W+K rep sums up the campaign pretty well, even doing prospective blazer-wearers a solid by providing a warning.

“This disposable paper blazer will be seen on the backs of influencers and fashionistas alike, but let’s not forget our regular guy who will be receiving it in this month’s subscription of GQ,” the rep reported to Adweek. “With this paper blazer, everyone gets to live the luxurious life of Old Spice Captain. Smell the smells, live the life, don’t go out in the rain because you will likely get paper machéd.”

For anyone familiar with Old Spice’s advertising, it’s no secret that antics abound. For further evidence, we need only look to the world famous Sweat Mop Boys used at college basketball games this year. Fans of mildly uninteresting trivia will be pleased to learn that the sweat mop promo was also done in collaboration with Wieden + Kennedy. Needless to say, this is a match made in promo heaven.

Here they are. Those exact same Sweat Mop Boys are back to mop sweat at another college basketball game. pic.twitter.com/UgdbTiNLWo

If anyone’s lucky enough to get their hands on one of these paper blazers, let us know what you think. Are they durable? Do they rip at the slightest movement? Does the application of deodorant lead to anything but disintegration? We need to know. The world needs to know. Be a hero. We’ll be waiting.