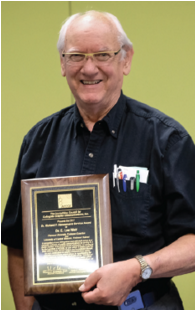 "Where do I get qualified employees?" That’s one of the questions printers have to ask themselves, said Sid Chadwick, VP of the Accrediting Council for Collegiate Graphic Communications, at a reception yesterday prior to the organization’s annual Board of Directors meeting.

“Technology is moving at an ever-increasing pace,” he continued, and printers need to keep up.

As a critical part of this process, colleges need curriculums that include research skills, database management, USPS regulations, and security issues. According to Chadwick, this coursework gives students a good grounding in training of a “practical nature,” which makes them valuable to employers following graduation.

The aging of the printing industry workforce is an important concern to Thomas Schildgen, outgoing President of the Board.

“There’s an awareness that has to occur,” he said, that the ongoing retirement of the Baby Boomer generation gives printers an opportunity to support the education of a new generation of technology-savvy employees.

Schildgen was presented with an award by Managing Director Ervin Dennis marking the end of his two-year term. “Tom has done a wonderful job,” Ervin said of his service.

Also, E. Lee Weir was recognized with the ACCGC Richard F. Hannemann Service Award for his many accomplishments in graphic communications education.

Weir was a charter member of the ACCGC Board, and helped write its original bylaws and Accreditation Manual.

The Hannemann Service Award is named for the late Richard Hannemann and is “presented to individuals who have given of their time, energy, and expertise in advancing collegiate graphic communications education programs” in the United States. Hannemann was a professor at California State University-Chico and University of Central Missouri, and was instrumental in establishing ACCGC.

ACCGC is the only national accrediting agency devoted to the accreditation of collegiate graphic communications and related programs. Currently, there are 12 ACCGC accredited graphics communications programs across the United States.