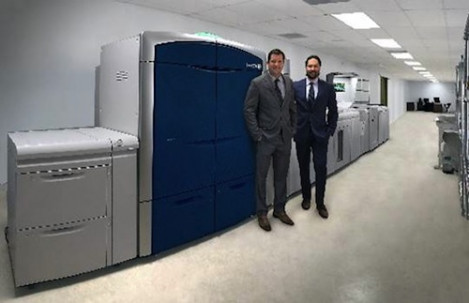 NORWALK, Conn. — December 16, 2016 — When Miami-based Solo Printing was ready to open a new digital printing department, it turned to Xerox and Xerox reseller Fujifilm for its first digital press, workflow software and sales training. Solo has equipped the new department with a Xerox Color 1000i Press and software from Xerox, XMPie and Fujifilm, with an aim to extend its record of six straight years of double-digit growth.

“Based on what our current customers were asking for and industry trends toward shorter runs and more targeted, personalized and variable communications, we wanted to be more involved in digital printing,” said Robert Hernandez, vice president of sales, Solo Printing. “We chose Xerox because it’s a leader in this segment, and we’re trying to get as close as possible to the quality we get on offset. The only press we saw come close was the Xerox Color 1000i Press. It also had the most robust componentry.”

Solo Printing serves the retail, travel, communications, electronics and education industries with brochures, catalogs, publications, self-mailers and general commercial printing products, as well as mailing, kitting and warehousing services. Until now, printing in the Solo plant was exclusively on web and sheetfed offset presses, though some digital printing work was outsourced.

Solo installed its new press in a recently acquired and refurbished building, which opened in October 2016 and is adjacent to the company’s plant.

“Solo Printing is a top-100 North American printer with a strong growth record and a great vision for building its digital printing business,” said Stephen Butler, president, Xerox U.S. Graphic Communications Operations. “We are committed to helping Solo deliver top digital printing services that will get their customers excited and help Solo extend its fabulous record of growth.”

About Xerox
Xerox is helping change the way the world works. By applying our expertise in imaging, business process, analytics, automation and user-centric insights, we engineer the flow of work to provide greater productivity, efficiency and personalization. Our employees create meaningful innovations and provide business process services, printing equipment, software and solutions that make a real difference for our clients and their customers in 180 countries. On January 29, 2016, Xerox announced its plans to separate into two independent, publicly traded companies – Xerox Corporation, which will be comprised of the company’s Document Technology and Document Outsourcing businesses, and Conduent Incorporated, a business process services company.