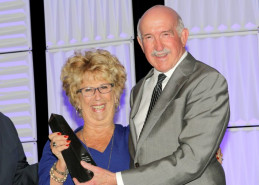 More than 70 awards were presented in the following categories: Gold Level, Platinum Level and Million Dollar representing more than $50 million in printing, signs and marketing services revenue for 2017 throughout the Sir Speedy and PIP franchise networks. In addition, six recipients received an Application Innovation Award for excellence in a particular client program/project achievement.

A major highlight of the Sales Forum is the presentation of the Don F. Lowe Salesperson of the Year Award. This year, the honor went to Carol Schoff of Sir Speedy in Sarasota, Florida. Don F. Lowe is the chief executive officer of Franchise Services and a member of the Sales & Marketing Executives International Academy of Achievement Hall of Fame. The Don F. Lowe Salesperson of the Year Award is given to a salesperson who has demonstrated professionalism in his/her sales career, who supports the National Salesperson Program and participates in events, who’s customer service focus brings credit to his/her franchise location and brand, and for his/her contributions to the success of others in the salesperson network.

As expressed by Mark Johns, Senior Business Development Consultant for Franchise Services, “Carol is a true sales professional who is most deserving of this award which also recognizes her unwavering commitment to serving her customers and supporting others in our network.”

Sir Speedy in Sarasota is a Top 10 Sir Speedy location in the worldwide franchise network and recipient of the 2003 Sir Speedy Franchisee of the Year award.  Carol is one of two top performing salespeople at the Sarasota business.

The annual Sales Forum event is open to all salespeople and franchise owners in the PIP and Sir Speedy franchise network. The three-day event encompasses general sessions with keynote speakers, breakout sessions, a vendor display, and an awards dinner. This year’s opening keynote featured national sales trainer and author, Bryan Flanagan. Signature sponsor of the event was Ricoh Americas Corporation.