"The Postal Reform Act of 2018: Improving Postal Operations, Service, and Transparency" was introduced in the U.S. Senate yesterday as a bipartisan bill co-sponsored by senators Tom Carper (D-Del.), Jerry Moran (R-Kan.), Heidi Heitkamp (D-N.D.) and Claire McCaskill (D-Mo.). If passed, the legislation would make sweeping changes to current rules and regulations that have led, in large part, to the dire long-term financial situation of the U.S. Postal Service, including 11 straight years of net losses and a net loss for its first quarter totaling $540 million - despite the USPS setting a record on Dec. 18, 2017, when more than 37 million packages were delivered, the most packages delivered in a single day in its more than 200-year history.

According to the co-sponsors, the bill would address several issues that have been hampering the Postal Service as mail volumes continue to decline. “The price of postage is decreased pursuant to federal court orders last Congress, eliminating the positive revenue stream from the exigent rate case in 2014. As the result of a compromise among the postal community, the bill restores half of the temporary rate increase while freezing any further rate increases until a new rate system can be finalized by the Postal Regulatory Commission,” the senators wrote.

The legislation also addresses reforms to the USPS cost structure, especially its mandate to pre-fund future retiree health care obligations. "In addition to reporting net losses for the 11th year in a row and defaulting on their legally mandated, multibillion-dollar retiree health pre-funding payments yet again, the Postal Service also, for the first time, missed payments they owe to the federal retirement system in 2017 - for a combined total of $6.9 billion," the bill's sponsors indicated. "For years now, the onerous pre-funding schedule for future retiree health care obligations has put the Postal Service in a place where it must cut costs - often at the price of service - and ultimately prevents them from investing in the infrastructure they so desperately need."

It would also create a new Postal Service Health Benefits Program (PSHBP) within the Federal Employee and Retiree Health Benefits Program (FEHBP), implemented and administered by the U.S. Office of Personnel Management (OPM), for all postal employees and annuity retiree recipients and require all Medicare-eligible postal annuitants and employees enrolled in the PSHBP to also enroll in Medicare, including parts A, B and D.

In addition, the bill would allow the USPS to introduce new non-postal products and services, ship beer, wine and distilled spirits, and partner with state and local governments in offering government services.

It would also increase transparency of Postal Service delivery results and would require that all delivery and retail performance results are posted in a transparent and user-friendly way. Service performance would reportedly be stabilized by preserving current service standards for at least two years.

The legislation has received positive support from several printing and mailing industry organizations. "PIA is hopeful that the bill's introduction signals the Senate’s awareness of the serious time sensitivity in passing postal reform legislation," said Printing Industries of America President and CEO Michael Makin. "Currently, the USPS balance sheet is swimming in red ink due almost entirely to statutory requirements that it pre-fund retiree health benefits up to 75 years at a cost of tens of billions of dollars. 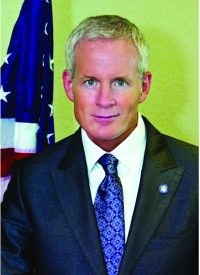 Michael Makin and the PIA support the new legislation.

"Meanwhile, the Postal Regulatory Commission (PRC) is barreling to a conclusion of its 10-year rate review process, and - barring legislation to financially stabilize the USPS - is expected to raise postage stamps up to 64 cents over the next five years. For business mail that generates over 90% of USPS revenue, the new PRC-directed postal rates could be even higher. This is a collision course that would be bad for individual postal customers, the printing industry and its supply chain partners and, ultimately, the future viability of a user-fee-based national postal system."

He added that just this week, PIA urged Republican and Democrat leaders in the House and Senate to include postal reform as part of the omnibus government funding bill; but it was was rejected. "Bottom line: time is slipping away to salvage a postal rate system that is affordable and predictable. Congress must act soon," Makin said.

The Coalition for a 21st Century Postal Service (C21), an organization representing the private sector mailing industry, announced similar support for the bill. "C21 is very pleased that a bipartisan group of senators has introduced the Postal Reform Act of 2018," said Art Sackler, manager of the coalition. "It would go a long way toward fixing the broken finances of the Postal Service, and ensure it will continue to deliver each year, as the public expects, the nearly 150 billion mail pieces that support our economy and the postal system."

C21 has very strongly supported the similar Postal Reform Act of 2017, HR 756, and its bipartisan sponsors in the House, and plans to do everything it can to secure passage of the Senate bill before a very urgent financial problem for USPS becomes dire later this year, according to Sackler.

Don Hall, CEO of Hallmark Cards, was also hopeful that a postal reform package can work its way through both Houses. "It is vital that Congress act promptly to pass legislation that will ensure affordable, reliable mail service six days a week,” he said. “I applaud the leadership of senators Carper, Moran, Heitkamp and McCaskill in crafting legislation to achieve that goal and respond to the concerns of leaders in the House of Representatives.”