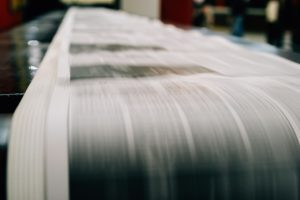 The tariffs and countervailing duties being imposed on Canadian imports are having a crippling effect, especially on U.S. newspapers.

A bipartisan group of lawmakers in the U.S. Senate, led by Susan Collins (R-Maine) and Angus King (I-Maine), have introduced a bill that would delay dumping tariffs and countervailing duties currently being applied to imports of Canadian uncoated groundwood (UGW), or newsprint, being used primarily by newspaper, book, directory and circular printers, as well as other publishers and printers. The PRINT (Protecting Rational Incentives in Newsprint Trade) Act would suspend the import taxes of up to 32% on Canadian uncoated groundwood paper and would require the U.S. Department of Commerce to complete a study within 90 days on the economic health of the newsprint and U.S. newspaper industry in general.

The bill would also postpone any action by the Commerce Department and the International Trade Commission on newsprint import duties until President Donald Trump receives the report and certifies that the taxes are in the economic interests of the United States.

Most importantly, the PRINT Act would halt the current collection of cash deposits for Canadian UGW imports. The tariffs have led to the highest prices for newsprint in the past five years - for an industry that is already under extreme duress from changing news consumption, newspaper readership and subscription habits among Americans.

Printing Industries of America has also been a vocal industry voice. "PIA has spent the better part of 2018 informing the Department of Commerce of the unique circumstances in the trade remedy case targeting Canadian imports of uncoated groundwood paper, providing a realistic viewpoint of paper consumption, and explaining the devastating impact taxing this product is having - now - on the print and publishing industries," said PIA President and CEO Michael Makin.

"Trade remedy laws are designed to help domestic industries attain a level playing field on which to succeed - not to create an exponential number of domestic losers in the process. The PRINT Act is crucial to restoring a much-needed sense of sanity surrounding tariffs on uncoated groundwood paper. PIA endorses this legislation and will continue to work to highlight the need for rational decision making in relation to this ill-conceived tariff."

How the Canadian Newsprint Tariffs Started

The preliminary countervailing and antidumping duties that have been slapped on imported Canadian UGW by the Department of Commerce emanate from a complaint filed by North Pacific Paper Corp. (NORPAC), a single-location paper manufacturer in Longview, Wash., which is owned by a New York-based hedge fund. 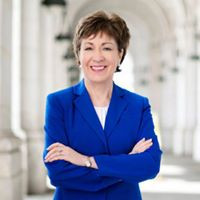 Maine Senator Susan Collins is taking a lead role in a bill to halt the tariffs. | Credit: Susan Collins/Facebook

"As a senator representing one of our nation's leading paper-making states, I have consistently fought for actions to ensure a level playing field for the domestic paper-making industry," Collins said. "In this case, however, one domestic mill owned by a venture capital firm appears to be taking advantage of trade remedies to add to its own bottom line, putting thousands of American jobs at risk."

In January, the Department of Commerce assessed preliminary countervailing duties on uncoated groundwood ranging from 4.4% to 9.9%, depending on the Canadian manufacturer, following NORPAC's complaint. Then, it later added additional preliminary antidumping duties, on top of the countervailing tariffs, of up to 22.16%.

The International Trade Commission (ITC) was expected to make a final determination in mid-September following a public comment period and hearing, and the Department of Commerce will reportedly issue a separate ruling on the dumping charges in August.

In response, a coalition called STOPP (Stop Tariffs on Printers and Publishers) was formed to persuade the ITC and Congress to reject the tariffs. Comprising printers, including Quad/Graphics, Valassis and Worzalla; newspaper publishers; paper mills and distributors; and several industry-related associations; STOPP contends that NORPAC’s claims of infringement ring hollow on several fronts.

For example, STOPP points to an ITC report issued last September that recognizes “newsprint tends to be supplied by producers in that region,” and that pricing subsequently reflects the regional marketplace. The report also found that almost 91% of imported Canadian newsprint comes into the Midwest and Northeast, while only 4.6% enters the Pacific Northwest, where NORPAC does business.

In addition, STOPP contends that the shift to digital alternatives is causing financial harm to U.S. uncoated groundwood manufacturers, not unfair pricing from Canadian imports. It notes that the demand for newsprint in North America has shrunk by 75% since 2000, primarily due to the strong headwinds that newspaper publishers have faced.

As a result, several newsprint mills have been shut down, while others have been converted to manufacturing linerboard for corrugated boxes in response to the growth of online shopping driven by the likes of Amazon. Since 2007, 78 machines have been closed or converted, according to the coalition, eliminating more than 10 million metric tons from industry production capacity.

Ironically, the higher prices for uncoated groundwood and supply destabilization caused by the tariffs will also impact NORPAC negatively. If made permanent, STOPP points out, the duties will drive a further reduction in uncoated groundwood paper demand, as newspaper, book and other print-based publishers have to cut their print production quantities, shift to smaller page counts, seek digital alternatives and, in worst case scenarios, even shut down and lay off their workers.

Since the tariffs were implemented, impacted printing and publishing companies are finding it difficult to pass along the paper price increases to their respective customer bases, and are already operating at too thin margins to be able to just absorb them.

The damage from the tariffs, if made permanent, will continue to have a ripple effect. It will hurt ink and other consumables suppliers, printing equipment manufacturers, as well as a long list of providers throughout the total supply chain.