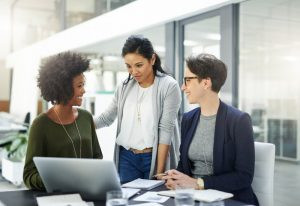 CHICAGO - November 3, 2017 - R.R. Donnelley & Sons Company, a leading global provider of multichannel solutions for marketing and business communications, announced it has taken the ParityPledge, building on its commitment to improving the pathway for women in leadership positions.

The ParityPledge asks that companies commit to interviewing at least one qualified woman candidate for every open position, vice president and above, including the C-suite and board. The ParityPledge is an initiative of Parity.org, a 501(c)(3) non-profit organization focused on bringing gender equality to the highest levels of business.

“I am thrilled to make this pledge on behalf of RRD to champion the advancement of women in business,” says Sheila Rutt, executive VP and chief human resources officer at RRD. “Our commitment to diversity and inclusion is fundamental to our ability to meet the needs of our current and future clients, drive business success and promote a high-performance culture. The ParityPledge strengthens our commitment to gender parity in the RRD workforce and broader dedication to diversity and inclusion in the highest levels of corporations today.”

The ParityPledge was inspired by the NFL’s Rooney Rule, a straightforward solution that improved diversity at leadership levels of NFL teams by requiring teams to include more diverse candidates in the interview process. In just three years, the Rooney Rule helped increase representation of African Americans in team leadership positions from 6% to 22%.

“Parity.org was founded to correct the stark reality of gender imbalance at the very top of companies today,” notes Cathrin Stickney, Parity.org founder and CEO. “While women represent 51% of the population, barely 20% of S&P500 corporate executive teams and boards are represented by women. We are thankful for organizations like RRD that are willing to become a role model for change. We believe their public commitment and example will help us realize exponential progress toward reaching parity at the top.”

Parity.org will announce its full list of founding companies, sponsors, partners and recipients of the Parity Awards for outstanding progress in gender equality during the Women’s Leadership Summit in January 2018. The Women’s Leadership Summit is part of the annual Silicon Slopes conference that coincides with the Sundance Film Festival and has an expected attendance of 10,000 people.