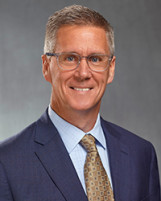 “We delivered solid financial results that were in line with our expectations, marking our second consecutive quarter of earnings improvement. We also successfully launched our accelerated cash repatriation strategy to further reduce debt outstanding in 2019,” said Dan Knotts, RRD’s President and Chief Executive Officer. “For the quarter, we continued to see benefits from cost reduction initiatives and exiting unprofitable business. In addition, we completed the relocation of our printing facility in Shenzhen, China, on schedule, and we achieved all critical milestones to begin producing the 2020 Census, which started in July. Building on our first half performance, ongoing strategic initiatives, and robust sales pipeline, we are confident in our ability to deliver a strong 2019 and further advance RRD as a leading provider of marketing and business communications.”

Net sales in the quarter were $1.51 billion, down $170.8 million or 10.2% from the second quarter of 2018, including a $110.9 million impact from business dispositions, primarily the July 2018 disposition of the Print Logistics business, and a $17.5 million reduction due to changes in foreign exchange rates. On an organic basis, consolidated net sales decreased 2.5% driven by lower volume in the Business Services segment, which includes reductions in Commercial Print products due to the continued exit of unprofitable business, as well as a decline in the remaining non-print logistics business, partially offset by volume growth in Packaging. The Marketing Solutions segment grew 2.6% organically driven by higher volume in the Digital Print and Fulfillment and Direct Marketing products.

Non-GAAP adjusted income from operations of $39.2 million, or 2.6% of net sales, increased $2.7 million from $36.5 million, or 2.2% of net sales, reported in the prior year period. Favorable changes in foreign exchange rates of approximately $11 million, productivity improvements, benefits from dispositions, and lower depreciation and amortization expense were partially offset by lower volume and inflationary cost increases.

Cash provided by operating activities of $12.9 million in the second quarter of 2019 increased $0.6 million versus the prior year period amount. Cash used in operating activities during the six months ended June 30, 2018 was $117.1 million compared to $128.0 million in the prior year period. The year-to-date improvement is primarily related to lower working capital partially offset by higher cash taxes and restructuring payments. Capital expenditures in the six months ended June 30, 2019 were $76.4 million versus $48.0 million in the prior year period. The 2019 amount includes incremental investments from the previously announced construction of a new facility in China and the 2020 Census project.

During the second quarter of 2019, the company sold its Research and Development business for $11.7 million of cash and recognized a pre-tax gain of $6.2 million, which is reflected in other operating income. Net proceeds were used to reduce debt outstanding.

The company finalized strategies to accelerate the repatriation of cash from foreign jurisdictions to the U.S. During the six months ended June 30, 2019, the company transferred $122 million of international cash to the U.S., which was used to reduce debt outstanding. Based on current regulations and process requirements in foreign countries, the company expects to transfer between $200 and $250 million to the U.S. during 2019, including amounts transferred during the first half of the year, and further reduce debt outstanding by December 31st. As of June 30, 2019, total debt outstanding was $2.12 billion, which is down $134 million from June 30, 2018. This comparison normalizes the seasonal impact of borrowing patterns, which generally results in higher mid-year debt outstanding.

The Board of Directors declared a quarterly cash dividend of $0.03 per common share. The dividend is payable on September 3, 2019 to stockholders of record as of the close of business on August 15, 2019.

The Company reaffirms its full year guidance as follows: 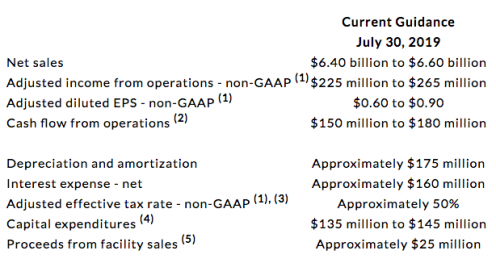