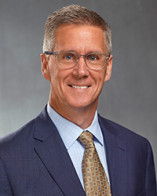 “I am pleased with our strong financial results for the quarter,” said Dan Knotts, RRD’s President and Chief Executive Officer. “Our favorable performance represents the third consecutive quarter of earnings growth compared to the prior year. We continue to strengthen our core by aggressively executing our cost reduction initiatives, improving our portfolio mix with growth in our targeted product categories, and enhancing our financial flexibility with our ongoing actions to reduce debt. Importantly, our team also successfully launched production of the 2020 Census early in the quarter and continues to meet all milestones and performance expectations. And as we enter the final quarter of the year, we remain confident in our ability to execute our operating plan and further advance RRD as a marketing and business communications company.”

Net sales in the quarter were $1.62 billion, down $30.1 million or 1.8% from the third quarter of 2018. The decrease includes a $13.4 million impact from recent business dispositions and a $10.5 million reduction due to changes in foreign exchange rates. On an organic basis, consolidated net sales decreased 0.4%. The Marketing Solutions segment grew 19.9% organically driven by higher volume in the Direct Marketing and Digital Print and Fulfillment product categories. The Business Services segment was down 4.6% organically due to the exit of unprofitable business in Commercial Print and declines in the Logistics business, partially offset by volume growth in Labels and Packaging.

Non-GAAP adjusted income from operations of $77.0 million, or 4.8% of net sales, increased $9.6 million from $67.4 million, or 4.1% of net sales, reported in the prior year period. The improvement was primarily due to cost reduction initiatives, favorable product mix and prior year losses from recent business dispositions, partially offset by modest pricing pressure and lower pension and other post-retirement benefits income in the quarter.

Earnings per share attributable to common stockholders was $0.18 in the third quarter of 2019 compared to $0.49 in the third quarter of 2018. The 2018 amount included a reduction to tax expense of $19.6 million or $0.28 per share primarily related to an adjustment to provisional amounts associated with Tax Reform and $4.5 million related to a pre-tax gain from selling the Print Logistics business. Non-GAAP adjusted earnings per share attributable to common stockholders of $0.31 in 2019 improved from $0.25 in 2018. The improvement was primarily driven by higher adjusted income from operations and lower interest expense, partially offset by a higher effective tax rate.

During the third quarter of 2019, the Company repatriated an additional $134 million of international cash to the U.S., bringing the year to date total to $256 million. Net proceeds were used primarily to reduce debt outstanding. During the fourth quarter of 2019, the Company expects to repatriate an additional $55 million of international cash, including net proceeds from the recently announced sale of its UK-based Global Document Solutions (GDS) business.

On Oct. 25, 2019, the Company sold its GDS business for $42.3 million. Net proceeds are expected to be repatriated to the US and used to reduce debt outstanding. GDS primarily provided statements and print management services to certain geographies in Europe and reported net sales of approximately $270 million in 2018, and $185 million through the nine months ended Sept. 30, 2019.

The Company revises its full year guidance as follows: 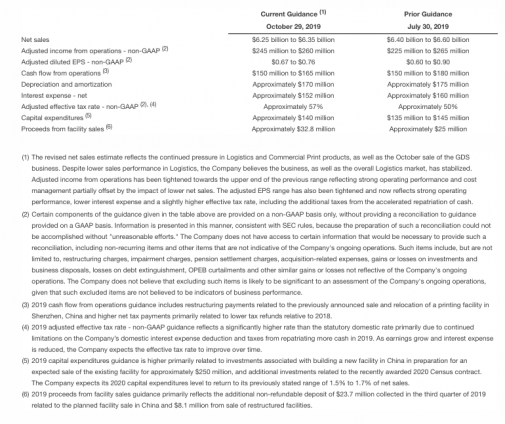