RR Donnelley Closes The Hennegan Co., Once Considered Among Most Premier Printing Companies in America

One of the iconic names in the printing industry was laid to rest July 27 with the closure of The Hennegan Co., located just outside Cincinnati in Florence, Ky. The shutdown officially marked the end of the award-winning, marquee printing operation that traced its roots all the way back to 1886, and to the revered Hennegan family name in printing that went along with it.

This latest closure delivers another blow to the greater Cincinnati area, following the shuttering this month of Arandell Corp.'s Walton, Ky., printing facility, which impacted more than 100 workers. That closure by the Menomonee Falls, Wis.-based catalog printing powerhouse Arandell was blamed to the drop in business resulting from COVID-19.

A Brief History of Hennegan

The Hennegan Co. was acquired by Consolidated Graphics (CGX) in 2007. CGX, in turn, was purchased for approximately $620 million by Chicago-based RR Donnelley in January 2014. At the time, Consolidated Graphics, then led by chairman Joe Davis and based in Houston, consisted of 70 locally-managed printing companies located across 27 states and in Canada, the Czech Republic, and Japan.

When the $85 million in sales Hennegan operation was acquired by CGX, Davis noted, “Bob Ott Sr., Bob Ott Jr., Kevin Ott, and the employees of The Hennegan Co. have built a world-class business with a longstanding reputation as a premier printing company by investing in new technologies, equipment, and infrastructure." As was common with CGX acquisitions at the time, all three Ott family members remained to manage the company. 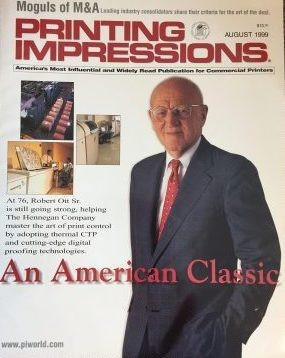 Robert Ott Sr., former chairman of The Hennegan Co., graced our cover twice, including in a 1999 issue that discussed the printer's thermal CTP adoption.

The true essence of The Hennegan Co. to reach that industry pinnacle was driven by Robert "Bob" Ott Sr. — grandson of one of the founders — who passed away in 2016 at age 93.

After a stint in the Coast Guard during World War II, he rose through the company, taking the helm from his uncle, John Hennegan, in 1969. Through sheer determination and an incredible ability to connect with people, Bob Ott turned Hennegan into a nationally known, ISO-certified printer that produced demanding, high-quality work for nearly every automotive company; slick annual reports for more than 80 Fortune 500 companies; and catalogs for fine retailers the likes of Tiffany, Harry Winston, Saks Fifth Avenue and many others. The company's output continually garnered it awards for superior craftsmanship.

As his obituary so rightly described, "It was Bob's passion that his company produce the best for the best. But, Bob did all this in his own very humble way. He did it not for his own recognition, but for his family and for the nearly 400 employees of Hennegan, all of whom he loved and cared for. Until his retirement at age 88, he would walk the floor of the Hennegan plant, talking with the employees, meeting visiting customers, and listening to them."

I personally had the pleasure of spending some time with Bob Ott and his wife, Mazie Kelly Ott — to whom he was married for 67 years — in September 1991 during an awards banquet held in honor of his induction into the Printing Impressions/RIT Printing Industry Hall of Fame. Easily one  of the most gracious and genuine individuals I have ever met, he sent me a personal, hand-written, thank-you note afterwards.

That same night we also honored Pierre Péladeau, founder of Quebecor Inc., who — like Bob Ott — was small in stature, but Péladeau was also brash and big in bravado. At  one point during his acceptance speech, Péladeau even pointed his finger and scolded some people in the back of the room for making too much noise while he was talking.

It would have been beneath Bob Ott to respond that way. The closure of The Hennegan Co. marks an end of a once-great company that was long led by a man who earned the respect of his employees — and an entire industry — by his kind demeanor, strong leadership by example, and true dedication to his craft.

Related story: Arandell Plans to Close Its Kentucky Printing Plant by the End of July