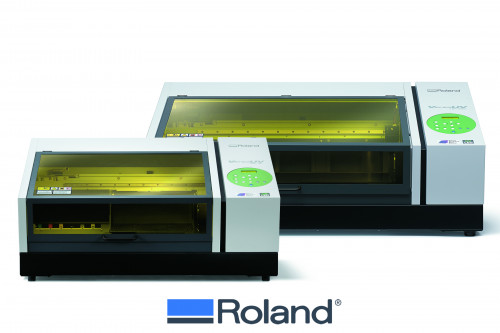 Roland has enhanced its VersaUV LEF series with the introduction of new LEF-200 (back) and LEF-12i (front) UV flatbed printers.

Improving on and replacing the previous generation LEF-20, the LEF-200 features a new on-board Primer option for priming a wide variety of substrates quickly and conveniently for improved media capability. It also comes with Roland VersaWorks Dual RIP software, which simplifies the process of producing graphics with special effects. The LEF-200 offers outstanding print quality, greater media compatibility, and ease of use for the personalization and specialty printing markets, which are characterized by small-lot production of numerous products. At 20" wide, the LEF-200 prints high-quality CMYK, White and Gloss ink effects, or an optional Primer in place of Gloss, on a range of materials and objects, including three-dimensional items up to 3.94 inches (100 mm) thick.

The LEF-200 utilizes Roland’s CMYK, White, Primer and Gloss ECO-UV inks, specially formulated to ensure premium quality printing. Gloss ink can be printed for spot gloss or matte finishes, as well as unique embossing effects. White ink can be printed as a spot color or as a flood behind CMYK on dark backgrounds or clear materials. The new Primer allows users to prepare spot areas for improved White and CMYK adhesion on difficult substrates. To meet individual business requirements, users can choose from three ink configurations: CMYK+Primer+White, CMYK+Gloss+White, and CMYK+White+White.

In addition to unveiling the new LEF-200, Roland DGA is also introducing its new VersaUV LEF-12i flatbed printer, an upgraded version of the 12" LEF-12. The LEF-12i flatbed printer, like Roland’s new LEF-200 and popular LEF-300 models, comes bundled with powerful yet user-friendly VersaWorks Dual RIP software designed to optimize efficiency and workflow. VersaWorks Dual boasts a new core engine for faster previewing times and improved handling of PDF and PostScript files, including files with transparencies. Without the need to return to design software, users can quickly and easily set-up special color layers like White, Gloss and Primer directly in the RIP software, as well as manage features such as offset, positioning, rotation, and registration.

Roberts expects demand for Roland’s LEF series UV printers – including the new LEF-200 and LEF-12i – to continue growing over the next several years. “The public’s increasing desire to personalize just about everything is translating into nearly unlimited opportunities for on-demand printing onto an ever-widening range of items,” he notes. “More and more businesses are using our LEF printers to provide custom printing of smartphone cases, accessories and more. We’re confident that the introduction of new devices with enhanced capabilities – like our LEF-200 and LEF-12i – will continue to open up new applications and profitable possibilities.”