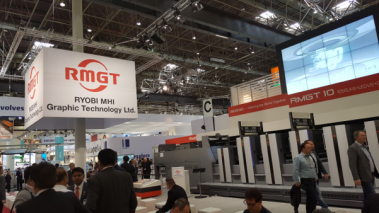 “The strong result posted at drupa 2016 proves that offset print not only still viable but actually vital to the profitability of our customers worldwide,” states Kozac Takata, manager of international sales and marketing, RMGT.

As expected, the digital RMGT DP7 drew great interest but it was the complete lineup of high specification offset presses from RMGT that drew customer’s sales orders.

“From the first day of drupa right through to the end of the show, we took 50 orders for presses of many configurations including nine long-perfectors. A number of our customers also considered larger format digital presses. However, after seeing the speed and quality of our 9 Series long-perfector, they decided to move forward with a more stable offset solution,” comments Takata. “Our 16-page format means our output fits into a printer’s existing post-press workflow avoiding costly investments in “digital only” finishing equipment. The value proposition of “no clicks” and a much longer equipment lifespan makes sense printers from all over the world.”

Exhibiting under the RMGT corporate theme: “IRODORI — Coloring the World Together” the RMGT stand drew large crowds for the nine daily presentations that showcased the latest productivity and quality enhancing technology available from RMGT. LED-UV instant curing again played a key role in the RMGT message and all curing used the technology originally released by the company at drupa 2008.

“It’s interesting to see how many of the other press manufacturers are now adopting the LED UV technology we developed so many years ago,” states Takata. “A very high percentage of our sales at this show rely on LED-UV curing. For RMGT customers, LED-UV has been mainstream technology since 2009.”

The RMGT 10 series press, in both the packaging oriented LX configuration and also the commercial print oriented LS configuration, received a tremendous response from visitors as a number of the presses ordered were 10 series machines.

“The reliability, durability and quality that RMGT offers packaging and commercial printers continues to make the 10 and 11 Series presses very popular around the world and we booked a significant number of orders during the show,” comments Takata.

RMGT equipment ordered at drupa 2016 will be landing on every continent in the coming months and RMGT customers will begin enjoying real world profit enhancements very quickly.

About RMGT (RYOBI MHI Graphic Technology)
RMGT is among the world’s largest manufacturers of sheetfed offset printing presses and the world leader in LED-UV technology with over 165 placements worldwide. Its high-speed, fully automated presses are respected worldwide for unsurpassed print quality, low total cost of ownership, extreme ease of operation and unmatched reliability. In partnership with Panasonic, RMGT released LED-UV Curing for Print at drupa 2008 and RMGT now offers the only G3 LED-UV technology on the market. Headquartered outside of Hiroshima Japan, RMGT is a joint venture company bringing together the best technology and manufacturing expertise of Ryobi Limited and Mitsubishi Heavy Industries. The enhanced product lineup and strengthened manufacturing prowess makes RMGT an indispensable brand for the printing industry.