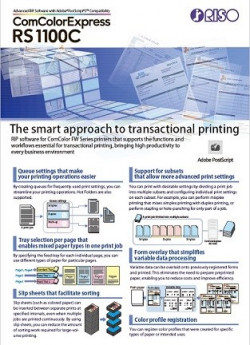 “Previously, an optional PS-Kit software was the only productivity-boosting software available for the FW Series,” said Andre D’Urbano, Director of Dealer Sales at RISO, Inc. “Now with the ComColor Express RS1100C, users have the option to enhance the ComColor FW Series to serve as a more capable production device.”

The ComColor FW Series printer was initially launched in June of 2016 and positioned to serve the requirements of the “Business Inkjet” market segment. Demand for the device has expanded into several other market verticals, including that of transactional printing. The FW Series – the FW5230, FW5231, and FW5000 – are compact, energy-efficient inkjet printers that produce full color, variable data prints at speeds of up to 120 impressions per minute.

More information on the ComColor Express RS1100C can be found here.

EFI Fiery is a Key Component of Digital Infrastructure