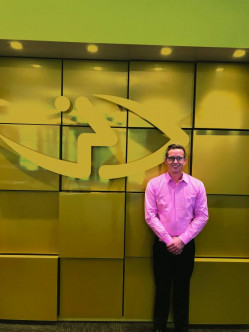 While still in high school, Tyler Christofferson decided that he wanted to eventually join his father’s business, Foresight Group. He began working with the pressmen on second shift while still in school and then, after graduation, continued to work his way around the company while taking classes at the local community college.

“I’ve worked in most departments at Foresight,” says Christofferson, 27, “including delivery, bindery, press, estimating, and accounts receivable — even the occasional property renovation.” Eventually, however, he ended up at Ferris State University to get a degree in Graphic Media Management. “With some decent experience for my age, I was able to hit the ground running at Foresight when I graduated in 2015.”

While his father might own the business, Christofferson still began his full-time career as a sales assistant, backing up the other full-time sales representatives. He then began to get some of his own accounts and, when one of the reps had to take a sudden leave of absence, the younger Christofferson was tasked with handling some much larger clients. “I was thrown right into the deep end with that,” he laughs. “It was ‘trial by fire.’”

From sweeping the parking lot at 12 years old to where he is today, Christofferson notes that, ultimately, one day he plans to take over the business when his father is ready to retire. He just hopes that doesn’t happen any time soon, noting, “I’m in no rush — that’s a big job. I’m going to continue in sales and see where that takes me for a while, but I ultimately want to learn how to run the business.”

What has him the most excited about the industry and its future is the possibility for growth. Signage is one area where he sees a lot of growth potential for Foresight Group, for example. “There are so many different products that we can offer on that end of the business,” Christofferson points out. “You’re really only limited by your own imagination.”

That drive to find new approaches to print has led to one of his proudest career moments thus far: breaking into the cannabis industry and creating an entirely new source of revenue for the company. “New business isn’t easy to come by in commercial printing, so to be able to work with … Michigan’s brand-new recreational marijuana industry continues to be one of my proudest moments.”

That said, Christofferson also notes that while today’s consolidation trend creates the opportunity to acquire other businesses to expand both service offerings and staff is one of the exciting elements of the printing industry right now, it also mirrors one of the more challenging: the need to find good people. “Most people my age won’t enter the printing industry. Unless they have family members who are already in it, most won’t look into entering what they perceive as a declining market.”

He adds that one of the biggest advantages he’s seen in the previous acquisitions has been that influx of new talent, and he hopes to find ways to show others of his generation just how much opportunity print can offer. He hasn’t hit on a magic bullet yet to make print more attractive to his peers, and he acknowledges it is only going to become a bigger issue during the next 10-15 years as a large portion of the current workforce moves into retirement.

“There’s a ton of opportunity to do anything you want in this business, and there is a lot of potential career growth,” he says, “but it’s hard to find people of my generation who don’t already have a career path they’re working towards.”

That said, Christofferson remains very excited about what the future holds, both for himself and for the industry as a whole. “I think there is a very positive outlook for this industry,” he says. “Consolidation has actually been good, helping [the remaining] companies all over the country progress, and not just survive.”

It is a strategy he hopes to continue as he learns the business and eventually begins to step into more management and decision-making positions. Christofferson might still be early in his career, but he sees a bright future ahead, with limitless potential.

How to Donate Printing and Signage Strategically

Linda Bishop on Expanding Your Sphere of Influence