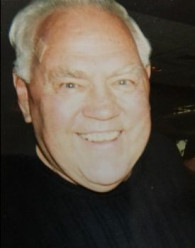 WEST CALDWELL, N.J. — July 28, 2017 — Nearly 100 people attended graveside services for industry stalwart Eric Ronald “Ronnie” Peterson on July 16 in Mahopac, N.Y. The founder and operator of Peterson and Sons Inc. for 40 years, he was 84 when he died on June 7 following a lengthy illness.

Many friends and family remembered and celebrated his life after services at Ballard Barrett Cemetery. Known for his generous spirit, unlimited curiosity, quick wit and great sense of humor, Mr. Peterson's influence on the graphic arts community lives on. His sons Bruce and Eric are driving forces at Colter & Peterson, recognized as North America’s largest independent distributor of paper cutters and paper handling equipment. With offices from coast-to-coast, the company has over 50 employees.

“Our father taught us the value of hard work, customer service and honesty,” recalled Bruce Peterson, who serves as the company’s president and CEO. “He was always deeply concerned about his employees and always was a fair and decent man. When he was working, he stressed the importance of balancing work and family time.”

Family played a prominent role for Mr. Peterson. Born in Brooklyn, he was raised on the family farm in Mahopac. He joined the Army and served in the Korean War before entering the family business. Mr. Peterson then married Astrid “Ott” Peterson, whom he first met in high school.

“He was a gifted athlete and won awards for swimming and diving in high school, and did it competitively during his two years in the military,” said Bruce. “Ron also remembered how many days he and my mom were separated when he served in the Korean War.”

Married for 58 years, Mr. Peterson and Astrid raised four children. Bruce said they enjoyed time with their 10 grandchildren and four great grandchildren in many ways, and often attended many of their kids and grandkids sporting events. Astrid passed away on June 9, 2011, almost six years to the day when Mr. Peterson died.

“The one thing that I’ll always remember is the love he had for my mom and our family. The connection and energy they had was very special.”

That energy took them many places. Mr. Peterson had earned a pilot’s license in his 20s and liked to fly his family to places up and down the east coast well into his 60s. It wasn’t unusual for him to make a quick trip to Boston to pick up his grandchildren and their friends from school.

“He got his license after the Korean War and he flew many different planes. My dad thought about becoming a commercial pilot at one time, but decided to run the family business,” reflected Bruce. “He flew over 1500 hours with twin engine rated aircraft.”

“My dad semi-retired in 1991, so he had a lot of free time. Besides playing card games, bowling, playing golf and working around the house, he enjoyed traveling and taking cruises with my mom,” said Bruce. “They took cruises to Hawaii, Alaska, Bermuda and Bahamas, but they also visited Japan, Hong Kong, China, Australia and New Zealand. They also traveled throughout Europe and experienced a lot of the world together.”

Ironically, it was a trip when he was a young boy that forever left an indelible impression on Bruce.

“When I was 8, my grandfather had just passed away and my mom told us that we were going to Norway for the summer. We drove down to Philadelphia and were on the boat for a couple of hours. Shortly before it left port, my dad got off and mom explained that he wasn’t coming with us, that he had to stay and run the business. Imagine at that age realizing you’re not going to see your dad for 2-3 months. That’s when I realized how much I loved him.

“Going through papers and things after he died, I found my second grade report card from that year. During our trip overseas, my dad had typed a message for me on the back. It was great to read and remember, and it will stay with me forever.”

Donations in Ron Peterson’s memory are appreciated by his family and can be made to a fund in his name. They can be sent to The New York Blood Center, attention Robert Purvis, at 310 E. 67th Street, New York, NY 10065.