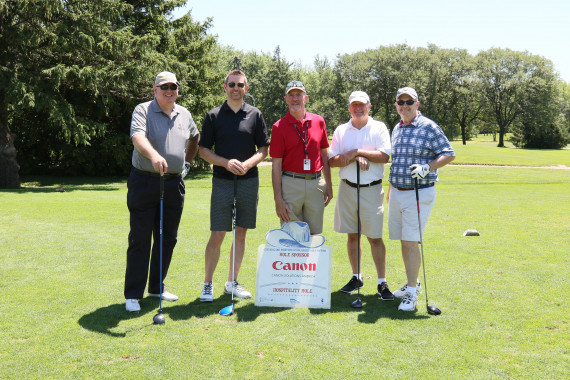 The proceeds from this golf outing support scholarships for deserving students who are seeking higher education in the graphic communications field. Since the inaugural golf outing in 2013, the participating organizations have funded more than 60 scholarships totaling more than $100,000.

Not only was the main course sold out a month before the outing, the demand for golfing was so great that more foursomes were added on a second course. Including dinner-only guests and volunteer workers, almost 200 members of the Illinois printing industry participated in this year’s event.

The course was in pristine condition, the weather was perfect, and the contests proved to be challenging. Players enjoyed the opportunity to network and have a good time while supporting a great cause.

Once the afternoon’s contests were over, participants gathered for a chuck-wagon dinner, prizes and raffles. The grand prize of a gas smoker and hand-crafted cutting board was won by Cory Shaw of Federal Envelope.

Steve and Kevin Richards of Richards Graphic Communications in Bellwood, IL, co-chaired this year’s event with the assistance of committee members from each participating organization. The committee thanks each sponsor, golfer and dinner-only guest for their continued support to advance education for Illinois graphics communications students.

For more information about the scholarship program, please visit http://glga.info/illinois-graphic-communications-scholarship-program/.

Unite Together to Discover What’s Next
Comments
PRINTING United Expo