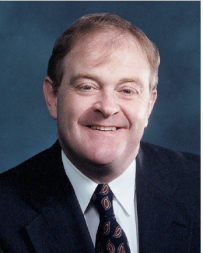 SHEPHERDSVILLE, Ky. — Nicholas (Nick) Simon, the president of Publishers Press and a 2003 inductee into the Printing Impressions/RIT Printing Industry Hall of Fame, passed away June 10 at the age of 57.

A 1981 graduate of Northwestern University, Mr. Simon and his brother — 2002 Hall of Fame inductee Michael — joined the specialty and trade magazine printing company in the early 1980s. They took control following the 1990 passing of their father, Frank Simon. The Simon brothers built the business to a $180 million concern, with 1,400 employees and two plants.

In a publishing world filled with publicly-traded companies, Publishers Press was that rare gem, the family-owned business. "I kicked around the idea of going to law school," Simon noted in a 2003 interview. "But the family, the tradition, is really important to me. Our blood line in printing mean a lot.

"[Being privately held]  makes us a lot more nimble," he said. "If a customer has a problem, they can call one of the owners — my brother or I — and we can straighten it out. No one person owns most of our competitors, so their structure is a little more cumbersome."

The company struggled mightily in the 1960s and early 1970s and was burdened by a heavy debt load, but Frank Simon was an early pioneer of running short-run magazines on web presses, which paved a path to success in the 1980s. The Simon brothers opened a second facility and built upon their father's work.

Nicholas Simon was involved in numerous charitable and civic endeavors, including the Crohn's & Colitis Foundation. He was also inducted into the Kentuckiana Business Hall of Fame.

How to Set Up Your Selling Week

How to Win a Bid at your Price