Reasons Why Printing Companies Should Automate Their Production Workflows 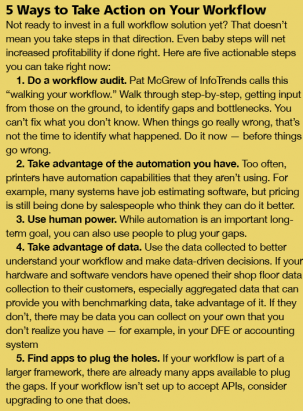 EVER SINCE Henry Ford used mass production to slash production time for the Model T, American business has been fascinated by automated production. The commercial printing industry is no exception. When properly utilized, automated workflow solutions like Canon PRISMAsync, Xerox FreeFlow Core and EFI Enterprise Print Suite create the potential to drive down costs, slash production time and eliminate processing errors, enabling commercial printers to improve quality and push through higher volumes, while not charging more to do it.

If you looked into automated workflows some time ago and think you know what these systems offer, you might want to look again. Many of today’s workflow solutions handle the creation and delivery of documents through a variety of new channels, including mobile; and with the growth in packaging and dimensional products like pop-ups, we are seeing some of these solutions offering the ability to manage, proof and produce 3D products. Solutions are also being refined to address the specific needs of market verticals, such as manufacturing, retail banking and higher education.

But there are some broader, more overarching trends, too. According to InfoTrends/Keypoint Intelligence’s “2017 Roadmap: Production Workflow Services,” there are five additional trends impacting workflow adoption and development right now:

One of the poster children for the benefits of automated workflow is Executive Press. The Richardson, Texas-based shop operates a variety of Heidelberg offset printing equipment, a black-and-white Canon varioPRINT 120 and a full-color Canon imagePRESS C7010VPS. The decision to automate came after Executive Press’ investment in the imagePRESS, which introduced yet another workflow into the mix.

In 2015, Executive Press invested in Océ PRISMAprepare, which has allowed it to drastically reduce manual touches and better manage these varied workflows. By automating the process of job splitting and prepress, for example, the shop saves an average of six man hours per week, enabling prepress to focus on other tasks.

Other areas where Executive Press has been able to quantify savings: $1,600 per month in labor, rejection rate dropping from 2-3% per month to zero and higher throughput.

With results like these, you might think printers would be flocking to invest in automated workflow, but that isn’t the case. In its “2017 North American Software Investment Outlook,” InfoTrends reports that only 8% of printers have fully automated workflow solutions, a number essentially unchanged from two years earlier. We know some of the reasons: cost and complexity; the challenges presented by legacy systems and mixed vendor environments; and the complexity of highly varied workflows with multiple entry points, to name a few.

But Pat McGrew, director of Keypoint Intelligence Production Workflow, sees the root cause as more historical. “A huge percentage of U.S. print shops are family-owned operations or began that way,” she says. “The people who built those operations knew everything inside out, and they knew their customers personally. As their businesses grew and they hired new sales specialists in certain areas, they made the investments in hardware to get that work done. However, the mindset hasn’t changed. As long as work is coming in and going out, they don’t see the need to automate processes they are used to being able to control manually.”

Even when printers do invest in software, McGrew says, many see it as once and done. They don’t continue to invest in the system or stay up to date with training. As a result, they don’t reap the benefits they should be getting.

“Too often, printers reap the initial benefits, then they let the system languish,” she notes. “You come back five years later, and everything is the same. They did not update for the new types of jobs that came in. They haven’t kept up with training.

“They haven’t kept up with new solutions from the vendor they worked with. If that software provider isn’t their hardware provider, they aren’t talking to them as often as they should. Even though they made an investment in automation, they now have new workflow holes and are experiencing bottlenecks in the same places as the people who haven’t.”

McGrew gives the example of color management solutions that aren’t updated when the printer purchases new equipment or Web-to-print workflows that are set up with initial mailing and delivery options, then are not updated again for years. The result is automation that can hinder rather than help. “If you’re going to make the investment in workflow automation, you have to keep up with it,” she adds. “Otherwise, it’s not giving you the benefits you expect. In fact, it can work against you.”

McGrew gives another example of Web-to-print solutions that are not set up to tie into the printer’s accounting system. As a result, the orders start piling up, then accounting is scrambling on the back end to manually input those orders. “You’ve just moved the inefficiency to another area of the shop.”

For the shops that dive into the details, however, the benefits can be substantial. Take Associates International (Ai), a Wilmington, Del.-based shop that began implementing a Web-based solution to win the print collateral business for a large U.S. pharmaceutical company. Ai needed to be able to add 200-300 new print-on-demand orders each day, with 36-hour turnarounds and a 40% reduction in costs. To meet these objectives, it developed a proprietary workflow called AiConnect Enterprise Storefront, which provided the full automation of the required prepress, printing, finishing and shipping processes.

But Ai still had gaps in its profitability. It still required post-production data entry to collect job costs, for example, often delaying invoicing for seven to 10 days. This resulted in inventory shortages or overstocks and delayed cash flow.

Within two years, Ai added the Xerox FreeFlow Process Manager (a product that Xerox has now replaced with FreeFlow Core) in combination with the Avanti (JDF-certified Print MIS software) and Creo Spire Color Services. Invoicing dropped to less than 24 hours, and job productivity and cash flow were enhanced. Ai was also able to eliminate one entire shift.

This level of investment is not yet the norm. While productivity and efficiency pressures drive the investment in workflow, InfoTrends’ software investment outlook reports that North American printers are spending only $35,000 per year on software. Most have not increased their spend in IT or software over the past two years.

McGrew notes that this disconnect is one of the huge surprises of the survey. Despite the clear need for workflow automation and industry education, printers continue to rely heavily on point tools and digital front ends. “In fact, for eight out of 13 of the most common job functions in their workflows, we found that the most common process is still a point solution, making automation impossible,” she says. “For two categories, the most common process is a DFE.” In only three out of the 13 categories tracked (job management, job scheduling and load balancing) did print MIS rank number one.  Printers may be able to get away with this for a while, but there is a collision coming. Currently, 31% of printers see investment in automation software as the answer to their productivity and workflow challenges, but the disconnect between projected investment versus actual investment is significant. Specifically, when Info-Trends asked whether their work was (or would be) produced in a 100% automated workflow, 9% of commercial printers in 2015 said their work was currently being handled this way.

Still, the market pressures are growing. With technology leveling the playing field, printers are going to have to turn their attention to internal processes to stay competitive and profitable.

One printer coming to this conclusion is Buffalo Printing. In 2008, the Western New York State printer was drowning in manual touches. It was managing more than 12,000 SKUs and taking in 200-400 jobs per day. Online order information was being manually re-keyed from the order spreadsheet into the job ticketing system. The result was a three- to four-day backlog of jobs to be entered. Its manual prepress operations were profit-killers, too — 70% of its job workflow was spent in prepress. Time to payment was 45-90 days.

Not only did the automation resolve Buffalo Printing’s bottlenecks, but the touch-free aspects of the workflow meant that it could reallocate the time to growing the business. “It enabled me to pursue other clients who I was hesitant to call on before because I was reluctant to put my biggest clients’ work at risk,” says Joe Farage, president of Buffalo Printing. Sales have tripled while his sales force has remained the same.

Allen Press installed components of the EFI Enterprise Print Suite
in December 2016 to provide real-time data and much needed visibility into areas of workflow, including waste and scheduling.

More recently, Allen Press, a printer and publisher of scientific, academic and scholarly journals in Lawrence, Kan., came to the same conclusion. It started installing components of the EFI Enterprise Print Suite late last year. The suite went live in December 2016 to provide real-time data and much needed visibility into areas of the workflow, including waste and scheduling.

“We are particularly excited about the dashboard functionality and Auto-Count,” says Allen Press’ project manager, Kevan Meinershagen. “We have installed Auto-Count systems on our press and bindery equipment, and are looking forward to taking full advantage of real-time metrics.”

The Enterprise Suite was also selected for its scalability. As the full functionalities are being rolled out, Allen Press is gradually replacing the legacy systems that have been creating barriers to future growth. The goal is not only to produce jobs more efficiently, but to invoice them more efficiently, too. 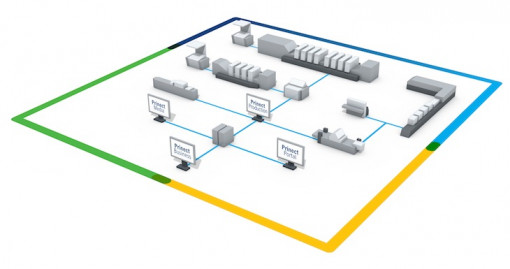 According to Bill Blair, senior VP and GM, the integration, speed and automation of the workflow will enable the shop to reduce job processing times by up to two-thirds. Geographics will also to be able to produce more work, for more customers, with the same number of employees.

The takeaway? Automated workflows present tremendous opportunities, but they aren’t “set it and forget it.” They require ongoing attention, investment and focus if they are to continue to produce results. As workflows continue to multiply — with conventional offset and traditional digital now sharing space with high-speed production and wide-format inkjet printing — printers will eventually hit a tipping point.