When production inkjet presses first came on the scene, they were large, expensive and out of the league of most in-plants. But as attendees of Monday’s In-plant Forum learned during a panel discussion with three in-plant managers who use inkjet, much has changed since those early days. (Watch the full session here.) Today, more than three dozen in-plants have installed production inkjet presses, including the participants in the discussion: 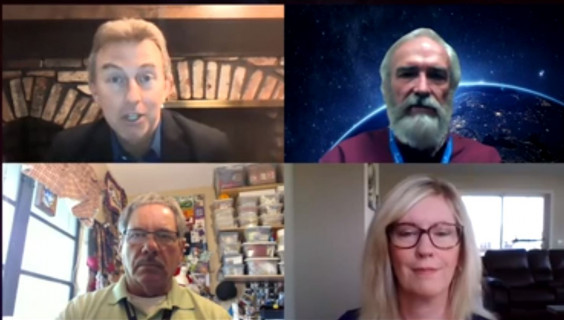 Hampton noted that her operation installed inkjet to be able to provide color printing at a reasonable price, drive more business to the in-plant, and save its parent agency money. The in-plant was able to replace multiple toner devices with its two inkjet presses. 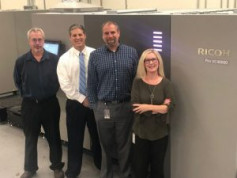 Standing with one of the State of Michigan’s two inkjet presses, a Ricoh Pro VC40000, are (from left): Guy Reynolds, production supervisor; Christopher Clark, IT analyst; Kristen Hampton, director; and Bradley Best, IT analyst.

“We got rid of a lot of equipment,” she noted, “and we were able to replace it with less equipment – and we have more throughput.”

In the past, the in-plant had often used preprinted shells, but now those jobs can be run on inkjet, eliminating the shells.

Inkjet has opened up capacity, which she is hoping to fill with new business.

“We’re looking at where work is being sent out that we could potentially utilize inkjet to bring it back in-house,” she says.

Uptime on the two inkjet presses is impressive, she says. The Ricoh boasts a 97% uptime, and uptime on the Xerox is over 90%.

“They just run,” she praised.

Inkjet quality, she insisted, is far above what it was years ago.

“The quality coming off the Brenva as well as the Ricoh are comparable to offset,” she said. “Our customers are very happy with it.” 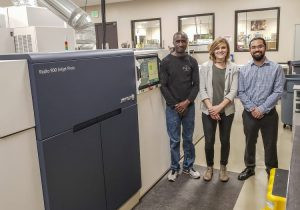 From left, with the Xerox Rialto 900 MP inkjet press at the Compassion International in-plant, are press operators Reagan Isombi and Laura Lobosco, along with Jerrell Sarmiento, senior production associate. Isombi, who is also the in-plant’s machine service technician, was sponsored by Compassion International as a child in his native country of Kenya.

Benson wholeheartedly agreed. Worrying about the quality of inkjet is no longer something in-plants should concern themselves with.

“It really is a non-issue,” he insisted. “Inkjet really has gotten to the point where the quality and the speed are there together.”

What’s more, he added, after the Xerox technicians set up the press, his staff has not had to adjust to color once.

“We just don’t have to mess with the color,” he said. “[We have] really been happy with the consistency.”

Inkjet is helping Compassion International fight childhood poverty by printing personalized correspondence between donors and the children they support. All of these materials include variable data, which the press handles flawlessly.

“The throughput time is drastically less than what it was with our cutsheet devices,” he remarks.

The Rialto 900 requires far less maintenance than the shop’s toner devices used to, he said.

“The uptime is better and just the maintenance time to keep us there is reduced,” he said.

“We’ve found extra capacity, and we brought in more work that we had not originally intended,” he said.

At PRIDE, which stands for Prison Rehabilitative Industries and Diversified Enterprises, the goal is to train inmates in vocational skills and transition them into the job market upon completion of their sentences. Adding a Canon VarioPrint i300, remarked Roberts, allowed his operation to teach relevant skills to inmates. It also drove down  costs, reduced waste, and increased throughput, he said.

Thanks to inkjet, the operation was able to go from 16 offset presses to just two.

“There’s a very significant reduction in cost due to plates, ink and all the maintenance associated with that, along with the [reduction in] waste,” Roberts said.

He praised the i300’s ability to match color and stay consistent over long runs, and echoed the benefits mentioned by the other panelists.

The three managers urged their peers to do lots of research when considering inkjet and test different substrates. One thing to be aware of, pointed out Hampton: “They are huge electrical users. That was a hit to our budget.” Make sure you’re prepared for that.

In the end, though, they all agreed, it has been worth all the work they did to prepare.

“It’s been a huge benefit for us,” said Benson. (Watch the full session here.)

The inkjet panel discussion concluded the In-plant Forum, which was packed with panels, presentations and product demos. Click the links below to read about some of the other sessions.